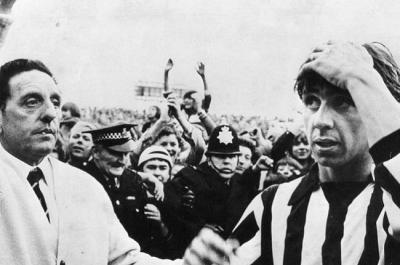 When Don Masson was a child, he knew then that all he ever wanted to was to play football.

Born on 26 August 1946 in the Aberdeenshire town of Banchory, he'd spend hours kicking a tennis ball against the wall and would refuse to go back to school if his mother did not play football with him when he came home for his lunch break.

Masson's talent and hard work paid off when he was scouted by Middlesbrough, the 12-year-old kid impressing for his school football team. As he grew up he also opted to train as a painter and decorator if he didn't make it in the game or to have a trade after football.

Whilst at Boro, Masson used to clean the boots of one Mr Brian Clough while he was still playing for the club, and when he was 18, he made his debut against Charlton Athletic.

All in all, Masson made 53 appearances for Boro between 1964 and 1968, scoring six goals, but he jumped at the chance to join Notts County.

In a 2012 interview with Left Lion, he said: "All I knew about Nottingham at the time was what I had watched on the TV when the cricket was being played. The camera would pan across to the City Ground and Meadow Lane and I remember thinking, “what a fantastic sporting city that looks.  The people there are so lucky to have all that so close together”.  I still think that now."

At the time, Notts were a Fourth Division team, but the then-21-year-old Masson would prove to be part of the spine which would be playing in the First Division just over a decade later.

In 1969, Jimmy Sirrel became manager and, with Jack Wheeler as his coach, Notts rose quickly up the leagues - with Masson pulling the strings from midfield and captaining the side.

Such was Masson's talent and leadership that he captained Notts to three promotions - 1970-71 from the fourth tier to the third; 1972-73 from the third tier to the second; and 1980-81 into the top flight.

Recognising his special talent, Notts supporters voted him their Player of the Year on three occasions: 1969, 1974 and 1980. No other player has been the outright winner of the award three times.

Despite Masson wanting to be at Meadow Lane throughout his whole career, in 1974 he got given the news that he was being sold.

He eventually moved to Queens Park Rangers, and he recalls the experience: "The last thing Jimmy said to me before we got to QPR was, “Don’t sign for them, because I’ve got something to tell you afterwards.”  Well, QPR were such a talented team then; I had the medical, and then I signed.  I told Jimmy and he said, “what did I tell you, little fella?  Tommy Docherty and Man Utd wanted to sign you, and that Revie fella at Leeds.  That’s why I told you not to sign.”

However, QPR almost won the league the year after Masson signed, and it thrust him into international contention, going on to make his Scotland debut aged 29 and winning the 1976 Home Championships.

After three seasons at QPR and one at Derby County, Masson then returned to Notts, chairman Jack Dunnett offering him a player-coach role, which he jumped at, and with a new system introduced by Howard Wilkinson, the Magpies would go on from strength to strength.

As Masson explained: "We played a sweeper system that Howard Wilkinson introduced that was quite radical at the time with Pedro (Richards) in the role and Killer - Brian Kilcline - as the strong centre-half.  It was when we went to Newcastle that season and played them off the park that I knew we would get promoted.

"That was the best Notts team I ever played in and it was fitting that I finished my career helping get Notts back to the top division for the first time in more than fifty years."

As football legends go, Don Masson is definitely one of those, especially for Notts County, a club which he continues to hold dear to this day.