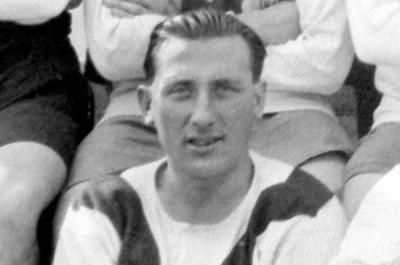 Born in Hayle, Cornwall, on 8 July 1896, Donald Cock learned the footballing ropes with youth club Camborne Boys Brigade and then played for the football team of Gwynne's Foundry, a London engineering business.

The centre-forward hailed from a footballing family, being the younger brother of England international Jack Cock, while his other brother Herbert was also a footballer.

As a man born in the late 1800s, Cock was unfortunate to come of age when the Great War broke out, and so his footballing career - which began at Brentford - also saw him called up for duty.

According to Ancestry, Cock was a Sergeant in the 2nd Battalion Middlesex Regiment, no. 13804.

The document reads: "He joined in August 1914, served on the Western Front at Arras, Neuve Chapelle, the Somme, Givenchy, Amiens, Armentieres, Ypres and Bullecourt, and was wounded three times. He was demobilised in 1919, and holds the 1914-15 Star, General Service and Victory Medals".

Cock then joined Notts County in October 1922 and played nearly 100 games in three seasons at Meadow Lane. Although he is seldom mentioned in the club's annals, he was the club's top scorer in 1922–23 and 1923–24, and helped the Magpies win the Second Division title in the former.

Cock's exploits with Notts - 32 goals in 85 games - saw Arsenal express an interest in the played, and he was signed by Leslie Knighton in March 1925, making his debut for the Gunners against Bolton Wanderers on 7 March 1925.

Unfortunately, in his next match, ironically against Notts County at Meadow Lane, his leg was broken by a strong tackle. He was out of action for five months and could not find favour under new manager Herbert Chapman.

Cock played just one more game for Arsenal before being sold to Clapton Orient for £1,500 in October 1925.

Cock regained his form at Orient, becoming top scorer for the Second Division side in 1925–26 and 1926–27 before finishing his career with brief stints at Wolves and Newport County in 1927.

He retired from professional football, aged 31, soon after, and died in 1974, aged 78, in Wolverhampton.

Cock's exploits with Notts County during the 1920s, top-scoring two seasons in a row and helping the Maggies to promotion, earn him a place in Pride of Nottingham's Notts Alumni hall of fame.