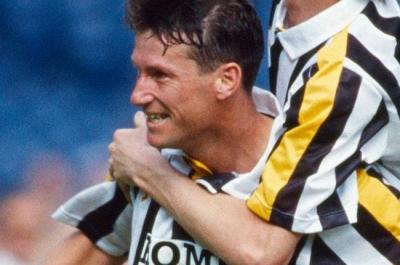 A key member of the Notts County side that enjoyed a swift climb to the top flight of English football, Gary Lund was born on 13 September 1964 in Cleethorpes.

He began his career at local club Grimsby Town and made his debut in September 1983, shortly after his 19th birthday, against Barnsley.

Reminiscing about his debut, the forward  told independent GTFC site The Fishy: "I replaced the injured Kevin Drinkell (I think) and came close to scoring when I hit the bar. I was substituted with about 20 mins to go. I suppose it was an average success!"

Lund made 60 appearances in total for the Mariners, with a good return rate of 24 goals in that time, including two hat-tricks, against Sheffield United and, ironically, Notts.

In 1986, after three years in the Grimsby senior setup, he upped sticks and moved to Lincoln City, where he spent one season, playing 44 games and scoring 13 goals.

Then came his stint at Meadow Lane, joining in the pre-season of 1987-88, one of many changes at the club with Derek Pavis coming on board and John Barnwell taking over the first-team reins from the retired Jimmy Sirrel.

In his first season at Notts, he scored 20 goals in Division Three, plus one in the Associate Members' Cup, as the Magpies finished fourth and secured a playoff place, only to succumb in the semi-finals to Walsall.

The 1988-89 season was less remarkable for both Notts and Lund, who scored just eight goals all season as the Magpies finished ninth in the division, but with Neil Warnock taking over in January, things were about to get very exciting for the club.

Lund broke into double figures again as Notts finished third in the third division, before navigating the playoffs and securing a place in the second tier.

The following season, Lund became more of a rotational player as Dave Regis joined in September, making 16 appearances and only scored five goals all season, though one of these was the 89th-minute winner against Manchester City in the fifth round of the FA Cup.

That year, Notts secured back-to-back promotions after finishing fourth and once again enjoying a successful stab at the playoffs.

With Notts now a top-flight side, Lund found himself on the fringes of the first team, making just 13 appearances (10 starts, 3 subs) as the strike force was repeatedly chopped and changed, sadly to no avail as the Magpies slipped back into the second tier.

Lund made more appearances in 1992-93 as Notts struggled to re-adapt to life in the new Division One, finishing 17th, and also had a loan stint at Hull City.

When Warnock was sacked and Mick Walker was brought in, Lund eventually found himself back in top form, with 1993-94 yielding 12 goals in the league and a further seven in cup competitions, of which five came in the Anglo-Italian Cup on the way to the final.

When asked about the best manager he worked under, Lund told The Fishy: "Mick Walker at Notts. He was only manager for a short time but we played some wonderful football in his time and only just missed out on the first division playoffs."

The following season proved very bittersweet for Notts as they won the Anglo-Italian Cup but were relegated from Division One. It proved to be Lund's last season at Notts as he then joined Chesterfield, where he remained until 1997, when he hung up his boots.

A loyal servant at Notts who made close to 250 appearances, Gary Lund will always be remembered fondly by the Black and White Army.