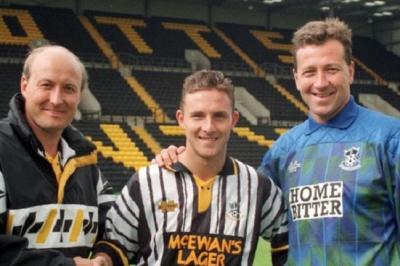 Born in the Maryhill area of Glasgow on 24 September 1970, Gary McSwegan came through the ranks at Rangers, one of the city's - and indeed the country's - top clubs, joining as a child and becoming a professional in 1986, aged just 16.

Although McSwegan struggled for game time at Ibrox, he nonetheless helped the club to one of its standout results of its history, scoring against Marseille - one of the marquee European clubs at the time - in the 1992-93 Champions League, a trophy which the French side went on to win.

In Rangers book "A Season to be Cheerful: Glasgow Rangers 1992-93", McSwegan - who was also involved in the build-up to the equaliser in the 2-2 draw, scored by none other than Mark Hateley - said: "My head is still spinning from the match against Marseille, probably because I've waited such a long time for it. I've always dreamed of scoring for Rangers and I've been here more than 11 years, so it's one I'll never forget."

Despite his hero's moment against Marseille, McSwegan sadly never did establish himself at Rangers, so in 1993, he upped sticks and joined Notts County in the pre-season of 1993-94 for a fee of £400,000.

The prior season, Notts had struggled in the second tier following relegation from the old First Division, but with McSwegan in the ranks to complement Gary Lund, it proved a much better time for the Magpies, as the Scot scored 15 league goals, including a hat-trick against Derby County in September.

Arguably his most crucial contribution that season came on 12 February, when he opened the scoring against Nottingham Forest and, even though David Phillips drew level for the Reds, Charlie Palmer popped up and did the rest.

In addition, McSwegan claimed a further two goals in the cups - the consolation in an FA Cup thrashing at the hands of Newcastle United, and the winner in the first round of the Anglo-Italian Cup against Ancona.

As all Notts fans will remember, the 94-95 season ended up being incredibly bittersweet, with a trophy in the cabinet in the shape of the Anglo-Italian Cup but a dismal bottom-placing league campaign.

No Notts players that season were particularly impressive, but McSwegan nonetheless managed to get nine goals in all competitions, including two in the result of the season, a 3-0 win over Tottenham Hotspur in the third round of the League Cup.

The following season, with Notts in the third tier, McSwegan - like many other players - moved on, with Dundee United snapping him up for £375,000 - only marginally cheaper than what the Magpies signed him for.

McSwegan spent the remainder of his career on the books of Scottish clubs Dundee United, Hearts, Kilmarnock, Ross County, Inverness and Clyde, alongside two loan spells south of the border at Barnsley and Luton Town.

He also won two caps for the Scotland national team - his first was on 5 October 1999, coming on as a late substitute in a Euro 2000 qualifier against Bosnia and Herzegovina, which Scotland won 1-0.

His second and final cap came four days later, against Lithuania, in which he started the game, and scored Scotland's second goal in a 3-0 victory.

McSwegan eventually hung up his boots in 2010 aged 40, and following on from retirement he worked as a scout for St Johnstone and Rangers, before setting up his own agency, Maxima Sports Management, where he continues to work today.

A true professional with a distinguished career, Gary McSwegan remains a well-loved player at all the clubs he has played for.