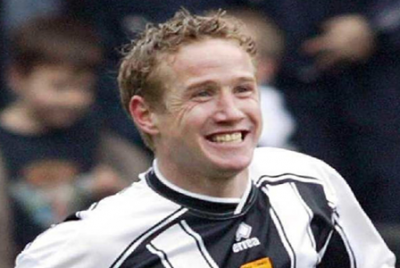 A rare shining light during two of Notts County's darkest seasons, Glynn Hurst's goals helped keep the Magpies safe when they were at their lowest ebb, when "previous level" meant "non-league" and possibly "extinction". The Barnsley-born player, much like a lower-league Dimitar Berbatov, delighted and frustrated in equal measure, but will always be remembered fondly by the Notts fans.

Born on the 17th January 1976, Hurst grew up in South Africa before returning to England, where he joined Tottenham Hotspur as an apprentice.

In 1994, he joined his birthtown club, where, given his young age and the club challenging for a place in the Premier League, he spent time on loan at clubs like Swansea and Mansfield.

Hurst played eight games for the Tykes in total before signing for Emley AFC (now known as Wakefield FC) in the Northern Premier League, where his impressive goal rate of twelve in fifteen appearances saw him snapped up by Ayr United, then in the Scottish First Division.

It was during his three years with the "Honest Men" that Hurst established himself as a class striker; his two full seasons, in 98/99 and 99/00, he was the club's top goalscorer, with twenty and fourteen goals respectively, and by the time he left, First Division Stockport County paying £200,000 for his services, he'd netted 49 goals in 78 league appearances.

Things didn't quite work out with the Hatters, his 27 appearances between February and December 2001 yielding just four goals, and he moved to Chesterfield before the year's end.

With the Spireites, he had more success, scoring 29 goals during his time there over two and a half years in Derbyshire, but it is perhaps his final goal for the club which is the most remembered, his last-minute winner against Luton Town in the final game of the season ensuring Chesterfield, bottom at Christmas, survived the drop.

Signed by Gary Mills with a view to rebuilding the squad following relegation and near-liquidation, Hurst rejected a new deal with the Spireites to sign for the Magpies, the striker debuting against Chester City in the first game of the League 2 season, and opened his account against Bristol Rovers a week later, his goal not enough to prevent a 2-1 away defeat.

He put in a brilliant performance in the Pies' League Cup tie against West Ham on 21st September, before hitting a devastating hat-trick away at Rochdale four days later, prompting Mills to call him "...the best player at West Ham, and the best player here today."

A natural goalscorer by trade, Hurst had great potential, and on form was a brilliant asset to the team, causing no end of problems with his bustling presence and talent in front of goal. However, Hurst was very much what you'd call a "confidence player", and although he was able to put in great performances, like he did against West Ham, Rochdale and Macclesfield in the first half of the season, his form, and as a result his confidence, dipped towards the second half, going eight weeks without a goal during one dry spell. Furthermore, there were many occasions where, sadly, his goals weren't enough to prevent Notts losing.

However, despite this, he still finished the campaign with fifteen goals, a good achievement considering the team ended the season in 19th place.

The beginning of the 2005/06 season saw Hurst back on form, scoring five in the first eight league games as the team propelled into the promotion places, before a fall-out with then manager Gudjon Thordarson saw the player dropped after a discussion between the two "became out of order".

A month later, the striker bagged a hat-trick against Bury to give Notts the win, and two weeks later scored the first in a 2-1 win against Boston United, but despite being the team's top scorer, the combination of differences between player and manager and the club needing to cut costs saw Hurst released by mutual consent on the 29th December.

Joining Shrewsbury a few days later, the striker scored on his debut against Wrexham, but he never quite regained his Magpies form, scoring just twice more in fifteen more matches.

Back and achilles problems saw him lose his place in the Shrews first-team the following season, and to regain his form, was loaned to Bury. There, he burst into form, scoring five in five, impressing the Shakers hierarchy so much they decided to first extend his loan, then sign him outright.

At Bury, it was a similar story to Notts - sporadic flashes of brilliance, followed by dry patches, with the occasional falling out with the coaching and management. He initially forged a fruitful partnership with Andy Bishop, but in 2007/08, his form once again dropped. He was nonetheless offered a new contract ahead of the 08/09 season, manager Alan Knill considering him to be a key squad player.

In the summer of 2009, Hurst was released from his contract, and after playing a few pre-season friendlies with Chester City, spent time on the books of non-league Gainsborough Trinity, Hyde United and finally, FC United of Manchester.

In 2011, Glynn Hurst officially retired from playing football, and after studying to become a teacher, he now teaches Religious Education at Sacred Heart Catholic College in Crosby, Liverpool.

A good servant to the club during a tumultuous time, the Barnsley-born player will always be remembered fondly at Meadow Lane.

Share your thoughts about Glynn Hurst on Pride of Nottingham by signing up to the website, visiting the forum and joining the conversation.