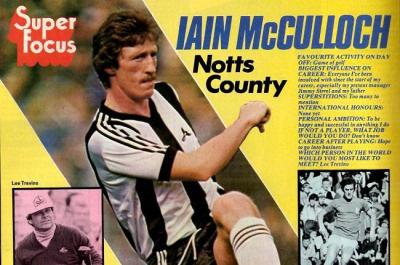 Born in Kilmarnock on 28 December 1954, Iain McCulloch began his footballing journey by coming through the ranks at local club Hurlford United.

He impressed with the Ford and in 1973 was scouted and signed by the big club in the region, Kilmarnock FC, where he spent five years. A versatile player who could play on the wing and up front, he made 115 appearances and scored 14 goals for Killie.

In April 1978, McCulloch became Notts County's then record signing when the Magpies parted ways with £80,000 for his services.

McCulloch's debut came against West Ham on August 19 that year and he made an immediate impact with two goals, though he couldn't prevent Notts from losing 5-2 at Upton Park.

It wasn't a one-off - he would score 18 goals in his first two seasons with the club in the old Division Two and ended the 1979-80 campaign as the Magpies' top goalscorer.

McCulloch formed a formidable partnership with Trevor Christie and together they fired Notts into Division One, Christie scoring 14 goals and McCulloch 11 goals.

In their first game in Division One, Notts faced English champions Aston Villa at Villa Park.

Despite the magnitude of the task, which included the Villans parading the trophy before the game, the Magpies went on to stun the champions in front of 30,097 fans, McCulloch scoring a superb goal in a 1-0 win.

The Scot ended up scoring 16 goals from 40 appearances, including a hat-trick away at West Bromwich Albion on March 24, as Notts finished 15th in the standings.

Notts continued their impressive spell in the top flight the following season with another 15th-placed finish, McCulloch scoring 10 goals from 34 appearances.

The following season, however, proved to be McCulloch's last when he suffered a badly broken leg in a collision with Manchester United goalkeeper Gary Bailey, which sadly proved to be the end of his professional career.

McCulloch was given a testimonial by Notts on October 23, 1985 and was presented with the Former Players’ Association Achievement Award at their 16th Annual Dinner in 2014.

In total, McCulloch made a total of 215 league appearances for Notts, scoring a total of 51 goals, a superb tally both in terms of service to the club and goal return, for which we are proud to have him as one of Pride of Nottingham's Notts Alumni!

Share your thoughts about this Notts Alumni legends piece on Pride of Nottingham by signing up to the website, visiting the forum and joining in the chat with hundreds of fellow Notts County fans.