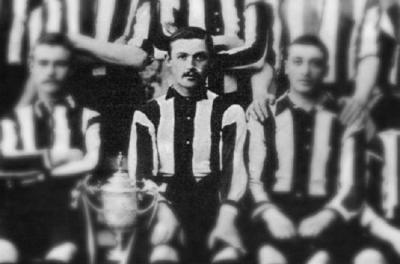 With Notts County having such a rich history, there are dozens of illustrious former players for every generation over the last 150 years, with some individuals having excelled for the club so far back that nobody currently alive will have seen them play.

This is the case of James "Jimmy" Logan, who was born in a time when Alexander Graham Bell, Thomas Edison and Queen Victoria were still alive.

Born on 24 June 1870 in the Scottish town of Troon, Logan began his career at Ayr United, just down the coast from his hometown.

National scouts soon spotted his potential and, in March 1891, he played in the Scotland side that beat Wales 4-3 in Wrexham, scoring on his debut.

However, the Scottish game was amateur at the time, while south of the border, clubs were turning professional, so many footballers were drawn to England.

On the day of the win over Wales, Logan was spotted by Sunderland scouts, and soon enough he signed for the Wearside club, though he only made two appearances as they won the 1891-92 Football League.

In October 1892 he returned to Ayr briefly before signing for Aston Villa for a transfer fee of £30.

He played ten times for them in the 1892-93 season, scoring on seven occasions, and followed that up with one goal in four games before Notts County signed him.

The Magpies were a Second Division club at this point, but Logan did not let this deter him, scoring 21 goals in 21 games and guiding the club to their first FA Cup Final.

To get there, Notts eliminated three clubs from the First Division, including Nottingham Forest, who they beat 4-1 in a replay, and so they lined up to face Bolton at Goodison Park.

In front of 37,000 people, Notts were done and dusted by the 70th minute as Arthur Watson opened the scoring in the 18th minute before Logan struck in the 29th, 67th and 70th minutes of the match - a feat managed by just one player before.

Another record broken was that Notts became the first team from outside the top flight to win the FA Cup and, appropriately enough, they received a hero's welcome when they returned to Nottingham.

“One would have to seek far back into the annals of demonstrations of a public nature to find a parallel to the proceedings on Saturday night,” enthused the Nottingham Evening Post.

The loudest cheers were for the man of the match. “Logan was the hero of the day,” wrote the Sheffield Independent, “and played in a brilliant fashion”. Another writer was moved to state: “He was like a clipper in full sail all through.”

Logan then moved on to play for Dundee and later Newcastle United in short but successful stints, scoring eight goals in the nine games, before transferring to Loughborough.

It was here that his career, and sadly his life, ended, in very unfortunate circumstances.

On Friday, April 3, the Luffs travelled to Sandbach to play Crewe Alexandra, and won 2-1.

The next day, they travelled by train to Manchester to take on Newton Heath, the club which later became Manchester United - but had forgotten the kits in Sandbach.

“Loughborough turned out in borrowed plumes,” reported The Monitor and News. “The search for clothing delayed the start for half an hour.”

In driving rain, 4,000 witnessed Loughborough lose 2-0 and the team, wearing the same drenched clothes as they wore in the game, returned to the Midlands.

Logan – who had a history of ill health – caught a chill and missed the next three games.

He recovered to return to action and scored in the final game of the season, a 4-1 win over Crewe, and looked to be recovering over the next month, but sadly it wasn't to be.

“No serious consequences were anticipated ’til Saturday,” reported the Monitor, “when the internal complaint of which he suffered led to complications and in the end brought on pneumonia.”

From then on, Logan went rapidly downhill. By Monday, James Logan was dead. He was 25.

As a mark of respect, the next day the Midland League championship flag was lowered to half mast at the club’s Athletic Ground.

At 3.30pm on May 29, Logan's body was lowered into the grave at plot 34 of compartment 114 at Loughborough Cemetery. A nameless hole in the ground. A pauper's grave.

This is seemingly where the story ends, but fast forward 120 years, Andy Black and Jimmy Willan launched a campaign to give Logan the recognition he deserved.

Until August 2016, the only reminder of him had been a sign on a dirt road leading to the town's Derby Road playing fields, bearing the name James Logan Way.

Andy and Jimmy's campaign culminated in the unveiling of the headstone at Loughborough Cemetery, in Leicester Road, on August 23, 2016.

A proper tribute to a legendary football player - just how it should be.

Share your thoughts about this Notts Alumni piece on James "Jimmy" Logan on Pride of Nottingham by signing up to the website, visiting the forum and joining in the chat with hundreds of fellow Notts County fans.