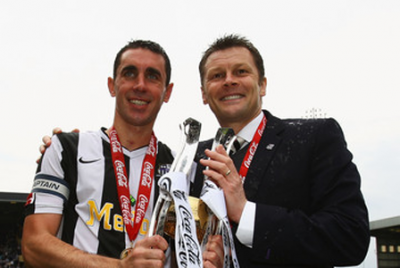 Born on the 12th October 1981 in Dublin, Ireland, Thompson began his football career with his local team River Valley Rangers, before joining Home Farm FC, a club famed for its illustrious youth system.

During his time there, he was called up to the Irish Under-16 team, and helped the Boys in Green to a first UEFA European Under-17 Football Championship, defeating the mighty Italy in Scotland.

At the age of seventeen, he signed for Forest, another team with a strong youth system, and by 2000 he had won another youth tournament, this time the Premier Academy League, as the captain of an Under-19 team including future Premier League mainstays as Andy Reid, Jermaine Jenas and Michael Dawson.

His full debut for the Reds came in the 2001/02 season away at Sheffield United, and by the following season he was a valued member of the first team, starting 25 games in a strong team which also featured the likes of Marlon Harewood, David Johnson, and Wes Morgan.

His impressive performances for Nottingham's second team led to an international call-up for the senior Ireland team, his first cap coming against Canada in 2003. This made him one of the few footballers in Irish history to represent his country at every level.

In 2005, a knee injury against Sheffield United saw him sidelined until the end of the season, one which would end in Forest's relegation from the First Division.

Although in fine form in the third division, even netting several goals along the way, several factors, including injuries and backroom instability, meant he would fall out of the first team picture.

In the 2006/07 season, he went out on loan to Tranmere Rovers, performing well during two separate spells with the Lilywhites.

In February 2007, a ligament injury saw Thompson out for six weeks, which, given his struggle to reclaim a first team place at Forest, came at the worst possible time. Indeed, the end of the season saw Forest release nine players, Thompson being one of them.

The Irishman joined Oldham Athletic, but injuries restricted his appearances to twelve, three as a sub. Knowing he wouldn't be in the club's long term plans, he returned to Nottingham, hooking up with the Magpies in October 2008 for a month's loan.

This would be extended for a further two months, as he slotted in perfectly in Notts' back four .

In January 2009, he made the decision to sign for Notts permanently, agreeing to a two and a half year deal. His uncompromising defending and immense aerial presence meant he was an instant success.

By the end of the season, he'd replaced Notts legend Mike Edwards as club captain, the club confirming he would remain skipper for the following season.

As every Notts fan knows, the 2009/10 season was a very odd one, as the club was taken over by the mysterious Munto Finance and saw a media circus complete with some of English football's marquee names turn up at the Lane, playing great football and winning the title but always having the fear of uncertainty regarding the club's finances and future as it emerged the whole affair wasn't entirely legitimate.

Thompson, along with other players like Ricky Ravenhill and Mike Edwards, were a bastion of stability and calm, however, and never let their guard or game down both on and off the field, as Notts emerged from the whole debacle relatively unscathed, Thompson lifting the championship trophy at the end of the season.

The 2010/11 season was more of a struggle, as Notts struggled in League One on the final day of the season, but Thompson's contributions were nonetheless important.

Thompson was one of a contingent of players to be released, alongside other first team players such as Jon Harley and Liam Chilvers.

Wishing to stay in Nottinghamshire, he chose to step down two divisions to join Mansfield Town, signing a two-year deal at Field Mill.

Tipped by the Mansfield hierarchy to become an instant success, his life was suddenly turned upside down as his team faced local side Ilkeston Town FC in a pre-season friendly on the 3rd of August 2011.

One member of their team, Gary Ricketts, had already caused injuries two of Mansfield's players, Ritchie Sutton and Martin Riley, before clashing with Thompson in the 68th minute.

All three players had to be taken to hospital. Thompson suffered a broken nose, required nearly 60 stitches, damaged his shoulder and dislocated his finger.

Even after recovering physically, so harrowing was the experience that he began having panic attacks and lost confidence on and off the pitch.

Despite seeing a psychologist, he wasn't able to fully overcome his issues, and as a result, was forced to retire from the game at the young age of 31 in 2013.

Since then, Thompson has qualified, and has been working as, a physiotherapist and personal trainer, and also does media work discussing the county's clubs.