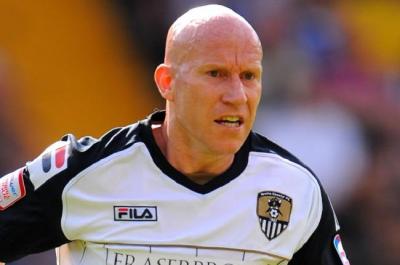 Over the years, Notts County have had some fantastic forwards on their books. From Tom Keetley in the early 30s to Mark Stallard in the 2000s via the likes of Jackie Sewell, Tommy Lawton, Tony Hateley and Les Bradd, every Notts fan you speak to will always have that one standout striker they remember bagging the goals for the Magpies.

Without a doubt, the last of the great Notts strikers - as of 2017 - is Lee Hughes. In his four years at Meadow Lane, he elevated himself to cult status with an impressive goal return and also a trophy, a rarity in recent years for the club.

Born on 22 May 1976 in Smethwick, West Midlands, Hughes was snapped up by West Bromwich Albion as a schoolboy from ages 11 to 15, although he was not offered a youth contract by the club.

Despite suffering the disappointment of not being taken on, he did not give up on his dream - he was taken on by semi-professional outfit Kidderminster Harriers, who were playing in the Conference at the time.

Nowadays, many clubs in the non-league are professional, but 20 years ago it was a rarity, so Hughes also held down a part-time job as a roofer as he juggled his ultimate goal with the need to pay the bills.

As it turned out, Hughes was a sensation in the non-league, scoring 34 goals in the 1996/97 season and bagging 70 in 139 games overall for the Harriers.

This led to West Brom, the club that had released him, eagerly taking him on board again, paying the Aggborough outfit an initial £200,000 - which rose to £380,000 after incentives - for his services.

Hughes, a lifelong Albion fan, set about repaying the Baggies for taking another chance on him, and between 1997 and 2001, he scored 79 goals in 156 appearances, with the 1998/99 season yielding 32 goals which made him the country's top scorer and the 2000/01 season seeing his strike partnership with Jason Roberts fore the club to the Championship playoffs.

In August 2001 Hughes was sold to Coventry City for a then club record transfer fee of £5,000,001 and he carried on his rich vein of form with 14 goals in 40 games, including a hat-trick in a 6-1 win over Crewe Alexandra.

However, in the season that he was away, West Brom won promotion to the Premier League, and the lure of his beloved club saw him return to the Hawthorns once again for £2.5m, giving him the chance to prove himself in the top flight.

Hughes's third stint at West Brom proved mixed as he failed to score a single Premier League goal that season, the club tumbling back into the First Division, and he was also criticised by teammates who claimed he was not pulling his weight - he responded by scoring 12 goals in 36 games the following season to send the Baggies up again into the top flight.

During the 2003/04 season, Hughes fell afoul of the law after he lost control of his car on 23 November and collided with another vehicle, leading to one death and two injured. Hughes and his passenger left the scene and turned themselves in to the police 36 hours later.

On 9 August the following year, Hughes was found guilty of causing death by dangerous driving, and was sentenced to six years' imprisonment. His West Brom contract was immediately terminated, and Hughes would go on to serve three years of his sentence before being released.

Upon leaving prison on 20 August 2007, Hughes issued a public apology, in which he said he made "dreadful mistakes and decisions that will live with me for the rest of my life."

Hughes signed for League One club Oldham Athletic as he set about rebuilding his career, and during that time he scored 25 goals in 55 games, while he spent time on loan at Blackpool in 2009.

At the end of the 2008/09 season he was released by the Latics, and his status as a free agent coincided with a remarkable turn of events at Notts, who snapped him up on a two-year contract on the same day that Sven-Goran Eriksson arrived at the club as director of football.

Hughes's career at Meadow Lane got off to a flying start as he scored a hat-trick on his debut in a 5-0 win over Bradford City on the opening day of the season, and claimed two more three-goal hauls against Northampton Town in September and against Burton Albion in December.

As the season went on, the initial euphoria at the club then turned to turmoil as the Munto takeover turned out not to be the incredible benefaction it purported to be.

Hughes, however, kept his head down and ultimately saw Notts over the finishing line as League Two champions, his 30 league goals making him the first Magpies player to achieve that amount since Tommy Lawton 60 years prior.

By the time the 2010/11 season began, Notts had a new owner and, with things seemingly more stable, Hughes signed a one-year extension to his contract that would see him at Meadow Lane until the summer of 2012.

The Magpies successfully staved off relegation in 10/11, with Hughes contributing 16 goals in 37 appearances.

Notts being Notts, there was to be another sterling moment coming up, as Juventus invited them to take part in a friendly to inaugurate their new stadium in September 2011, and became the first opposition player to score there as he grabbed County's goal in a 1-1 draw watched by the whole world.

Sadly Hughes's time at Notts would come to an acrimonious end as then-manager Keith Curle opted not to keep him as first-choice, with Yoann Arquin preferred in the role instead.

This meant that Hughes decided to up sticks in search of first-team football, and on 7 January 2013, his contract was terminated by mutual consent.

Port Vale was his next port of call, signing a contract until the end of the season, and his goals helped the Valiants to promotion into League One, ensuring his deal would be extended until 2014.

In 2017, he rocked up at Worcester as both player and joint-manager alongside John Snape, but at present he is back to just playing and the lucky club to have his services is Halesowen Town, having joined in March 2018.

Notts County fans have not had much to smile about this century, it has to be said, but for one season, the Magpies were utterly sensational, and for that campaign, Lee Hughes was at the centre of it, which is why he is so highly revered by the Black and White Army.