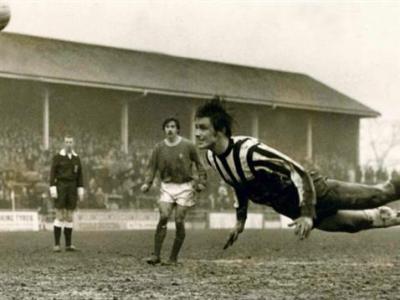 Notts County has seen plenty of star players grace the Meadow Lane pitch over the years, from the vintage icons of the early 20th century like Billy Flint through to the ones still professionally active such as Kasper Schmeichel and Alan Judge.

However, one player is in the annals thanks to a prestigious statistic, confirming his status as one of the club's all-time greats for decades to come. That man is Les Bradd, Notts County's all-time leading goalscorer.

Born in Buxton, Derbyshire in 1947, Bradd was scouted by Rotherham playing for local team East Sterndale, and in 1966 signed for the Millers.

His spell with the South Yorkshire club was brief, although he did net his only goal against, ironically, Notts County, in the League Cup in August 1967.

Just two months later, joined the Magpies, and he would soon embark on a career where local hero status would beckon.

His first goal in black and white came in a 2-0 win against Rochdale on the 21st October, one of ten goals he would score during the course of the season.

Powerfully built, bustling and with an eye for goal, Bradd also helped set up goals, his great link up play benefitting Tony Hateley and, later on, Kevin Randall and Mick Vinter.

As he developed his all-round game at Meadow Lane, so did the quality of the whole squad, and by 1971, under the tutelage of the great Jimmy Sirrell, Notts had climbed out of the Fourth Division as champions, nine points in front of runners-up Bournemouth. At this stage, Bradd had scored 39 goals for the Magpies, but more was to come.

The following season, as Notts finished just three points off promotion in the Third Division, Bradd scored an impressive 21 goals, more than the previous two seasons' already decent contributions put together, in addition to three in the FA and League cups, and by 1972/73, Notts went one further and were promoted into Division Two, Bradd scoring nine and helping his team-mates score many more.

Bradd eventually reached the 100-goal mark in April 1976, scoring against Fulham in a 4-0 win, in a season where his contributions also helped Notts knock First Division sides Sunderland, Leeds United and Everton.

If that wasn't enough, he sealed his place in Notts County's highest echelons with a goal against Wolverhampton Wanderers just a year later, surpassing Tony Hateley as the club's all-time leading goalscorer.

At the start of the 1978 season, Bradd's love affair with the Magpies ended, as he left Meadow Lane for Lancashire, joining Stockport County. He continued his spectacular goalscoring record, netting 31 goals in 117 appearances, before moving on once again in 1981, remaining in Lancs as he became a Wigan Athletic player.

His tally of 25 in 63 during his period with the Latics, even helping them gain promotion to the Third Division, will ensure both teams will remember him fondly as a player, but it is Nottingham where Les Bradd is most cherished and revered, given his key role during one of the club's brightest periods, not to mention his record-breaking goals tally.

Bradd is now retired, but carries on doing work for the club as an Ambassador and is incredibly active in this role. Showing how much of a good sport he is, he featured in a Soccer AM special on Saturday 7th December 2013 featuring Mockney character Franky Fryer which showcased Nottingham's attractions, including the mighty Meadow Lane.

With it being 50 years since making his Magpies bow, Bradd has this year released an autobiography named Far Post: A Striker’s Tale of Scoring Goals and Breaking Records.

In this book, Bradd takes an in-depth look at his own career and gives an exclusive insight into his relationship with club legends like Jimmy Sirrel, Tony Hateley and Don Masson, and is available at lesbraddbook.co.uk or at the Meadow Lane club shop.

If ever one man deserved to be called a Notts County legend, Les Bradd would be more than deserving of the title.

Share your memories of Les Bradd's playing career or of meeting the man himself by signing up to Pride of Nottingham, visiting the forum and joining the conversation.