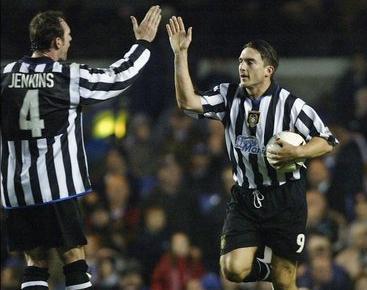 Many notable players have turned out for Notts County over the years.

Some, who turned out for the club in the decades following its creation have been virtually committed to folklore, with the occasional grainy black-and-white photo.

Some, like post-war prodigy Tommy Lawton, may be remembered by the likes of our grandparents or parents.

The further we go through the decades, the more likely it is that the younger generations may have a recollection of them, either through our older relatives or first-person.

In terms of recent players, that is, those who have played for Notts County in the 21st century, there are few more lauded by fans than the man I'm writing about now.

You ask a few dozen twenty-something and thirty-something Notts fans about who their favourite player is, and chances are, a sizeable amount will say "Mark Stallard".

Stallard was born in Derby in October 1974, and began his career with local team Derby County, signing schoolboy terms in 1991. During those fledgling years, he made over 30 appearances for the Rams, as well as being sent out to gain experience at Fulham and Bradford City.

He was on Derby’s books until January 1996, when the Baseball Ground outfit – the club moved to Pride Park the following year – accepted a bid from the Bantams in the region of £110,000 for the then 21-year-old striker.

Stallard etched himself into the Bradford fans’ hearts when he scored the second goal in the club’s Second Division play-off final victory against Notts County of all teams, just four months after joining the Valley Parade outfit.

With the Yorkshire club in the First Division, Stallard spent some time on loan at Preston North End, before being sold to Wycombe Wanderers, then of the Second Division, in March 1997. His time with the Chairboys was fruitful, netting on average a goal every three games in the league.

Eventually came his move to the mighty Magpies in the spring of 1999 for the princely sum of £10,000, and though the club was going through some tumultuous times, Stallard remained a shining beacon of light throughout his entire spell at Meadow Lane, scoring 67 goals during his five years with Notts.

His manager at Meadow Lane, Billy Dearden, said Stallard helped the club through some dark times.

"We went into administration for 18 months, and it was only because of people like Stallard that we kept going," he told the BBC. "He was a top man to work with. He was a very good trainer, and most importantly, he was a goalscorer. He could have probably played at an even higher level."

Stallard was rewarded for his exploits at Meadow Lane by being named the club’s player of the year and players' player of the year in 2003, after scoring 25 goals as Notts battled against relegation and financial adversity during the difficult 2002–03 season.

Sadly, all good things must come to an end, and so too did Stallard’s stay at Notts County, as he decided to up sticks and move to Barnsley.

Things didn’t quite work out for the striker at Oakwell; after 15 appearances, he was allowed to go on loan to Chesterfield, before making a return to Meadow Lane in February 2005.

After his second spell at Notts came to an end, Stallard moved to Shrewsbury Town at the start of the 2005-06 season, and stayed there for a year, before again upping sticks for another return to the East Midlands, this time with Lincoln City, where he hooked up with former youth teammate Adie Moses.

His time at Sincil Bank was fruitful, the first few months yielding seven goals and yielding the striker the League Two Player of the Month award for September 2006.

Stallard spent two years with the Imps, scoring 17 goals in 66 league appearances, but with his second season being affected by injuries and suspensions, he was let go by the club at the end of the 2007-08 season.

He decided to remain in the East Midlands alongside Moses as they hooked up with Mansfield Town, and for a short period of time, the duo were made caretaker managers of the Conference club and maintained a 100% record of two wins in two games.

Stallard then moved to Corby Town at the end of his contract with Mansfield, after being impressed by the club's ambition, but with the striker looking to forge a career in financial advising – a shrewd investment considering his footballing career was in its twilight he decided to leave the Northamptonshire outfit, citing an unwillingness to draw a wage from the club if he could no longer produce his best football for the team.

It proved to be a gesture that drew praise from the Blue Square North side's manager Graham Drury, who said: "I wish I could work with more people as honest and professional as Mark Stallard.”

And in one short sentence, Drury described Stallard’s career in a nutshell. An honest, hard-working, professional, skilled player, one who played his best football for Notts County and kept the club smiling during testing times.

Luckily for the Notts faithful, Stallard continues to be heavily involved with the Magpies, co-commentating on the club's matches for BBC Radio Nottingham alongside Charlie Slater, having previously done so with the legendary Colin Slater, and regularly offering his footballing services for charity games linked with the club and around the East Midlands. His day job, meanwhile, sees him managing his own financial advice firm.

Mark Stallard, you are a Notts County legend, and a proud inductee of Pride of Nottingham’s Notts Alumni!

Discuss Mark Stallard's career and any memories you have of him by signing up to Pride of Nottingham, visiting the forum, and joining the conversation.