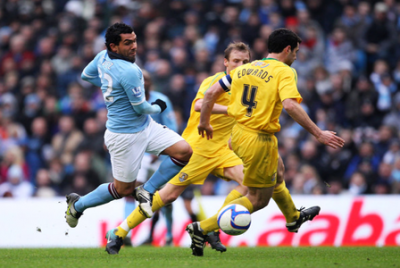 In the lower reaches of the Football League, the turnaround of players at football clubs is generally quite high.

Contracts tend to be one or two year deals, and players who fail to make the grade are shipped out or let go before long, while better players are more inclined to make the step up to bigger clubs in higher divisions who can offer better wages and challenge for honours.

Mike Edwards, however, bucks that trend. Over two spells, the combative defender has been on the books of Notts County for a combined total of over ten years, becoming club captain and playing over 300 games for the Magpies in the process.

Born in Hessle, a town near Hull, on 25 April 1980, the Yorkshireman began his career at Hull City, joining the club as a trainee. He made his debut in December 1997 away at Rotherham United and turned professional at the end of the season.

Edwards is loved by the Hull fans because, aside from making over 200 appearances for the club, he was the last East Riding protege to be raised and discovered locally and to work through the schoolboy and apprentice ranks to become a fully-fledged first team player.

He was part of the famous Great Escape team of 1998/9, which survived relegation from the Football League after being rooted at the bottom of the table for much of the season, and continued to thrive under managers Brian Little and Jan Molby before suffering a cruciate injury. Peter Taylor arrived and, sadly for Edwards, decided to release him just as he was restoring his fitness.

A short spell at Colchester United in 2003 was followed by a season at Grimsby Town, and in the 03/04 close season, he was signed by then Notts manager Gary Mills on a free transfer.

He quickly established himself in the heart of defence for the Magpies, relegated from the Second Division the season before, but just ten games into the season, a cruciate ligament injury suffered against West Ham in the League Cup ruled him out for six months.

As Mills was replaced by Gudjon Thordarson, the defender recovered and was back in the first team by the time the 2005/06 campaign began. A versatile and committed player, Edwards played all 50 league and cup games during the troubled season, both in central defence and central midfield, and did enough to earn a new two-year deal.

The following season, his consistency, talent and commitment to the cause saw Notts finish the season comfortably in mid-table, a massive improvement on the year before, as well as embarking on a great League Cup run which saw them defeat Crystal Palace, Middlesbrough and Southampton (against whom he scored). His reward was the Player of the Season award and the club captaincy.

In a cruel turn of events, Edwards then suffered another long-term injury in the 07/08 pre-season. A dislocated right ankle, fractures to both bones in his lower leg and ligament damage meant he was ruled out until the end of January.

Notts missed him terribly, only surviving relegation by the skin of their teeth in the last two games of the season, and the club recognised his importance by offering him a new deal, the player more than happy to repay the faith showed to him by the club in the face of his injury problems.

"Steady Eddy" was ever-present in 08/09, playing 43 league games as Notts, aided by points deductions to several teams in the league, survived another season in the Football League.

Then came the oddity that was the 09/10 season and everything that came with it, as Notts were taken over by the enigmatic entity that was Munto.

A season that began on a high, with promises of investment and marquee players and staff coming to Meadow Lane, soon became a confusing and anxious mess as the takeover turned out to be fraudulent, but luckily there was a happy ending as the club finished top of the league and the ownership and financial issues were resolved.

Despite all the uncertainty, Edwards played 40 league games and scored 5 goals as Notts were promoted with 93 points, and for his efforts was awarded another new two-year deal.

Back in League One, Edwards initially lost his first-team place to the pairing of Graeme Lee and Krystian Pearce, but soon, unsurprisingly perhaps, won his place back, and played a total of 39 league games as Notts consolidated their position in the third tier. He also captained his side, and played his 500th professional game, in the fixtures against eventual FA Cup winners and future champions of England, Manchester City.

The 2011/12 season saw Steady Eddy become one of a select few to play 300 games for the Magpies, reaching the milestone against Scunthorpe United in March, and also played against Juventus in the historic first game at the Juventus Stadium.

When Edwards was only offered a one-year deal at the end of the season, he decided to up sticks for a more secure contract, joining Carlisle United, and it looked like the love affair between Notts and him would be consigned to history.

Like all good love stories, however, this also came with a happy ending because, two years later, he returned to Meadow Lane as a coach, and also registered as a player to help the team out in times of need.

As it turned out, Edwards played a total of 21 games in his first season back in black and white, scoring three goals in the process, and in 2015/16 he upped his game considerably, bagging FIVE goals in just 17 games - the kind of rate you could expect from an attacking midfielder - including TWO braces.

In 2016/17 he was used much more sparingly, but still appeared twice from the bench against Cambridge United and Barnet in November, and this season, with the club under a new lease of life under Alan Hardy, he has been able to get on properly with his coaching role at last, although he is also registered as a player and can be called upon if need be.

He was a figure of stability, professionalism and consistency over one of the most turbulent eras at the club and is still giving his all for Notts now that stability is back.

For all this and more, Steady Eddy will forever be remembered as one of Notts County Football Club's all-time greats.

Share your thoughts and stories on Mike Edwards by signing up, visiting the Pride of Nottingham forum and joining the conversation.