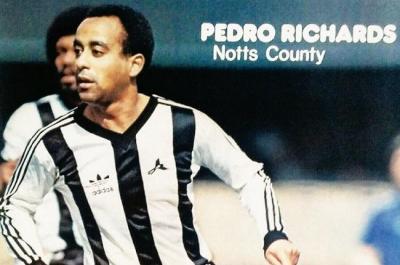 Pedro Richards was born on 11 November 1956 in Edmonton, London, to a British father and a Spanish mother.

When he was young, he was taken with his mother to live in the northern Spanish town of Laguardia until the age of 11, when they moved to Nottingham.

Richards's footballing skills were noticed by the Notts County scouts and he was duly taken on as an apprentice by the club before signing professional papers in November 1974.

His debut for the then-Second Division side came shortly after his birthday, on Saturday 23 November, under the tutelage of the great Jimmy Sirrel, though it proved a baptism of fire as Notts lost 3-0 away at Sunderland on that day.

In total, Richards's first season saw him used sparingly, making seven appearances as the Magpies finished 14th in the second tier that season.

The following season, Notts finished fifth in the table and also made it to the fifth round of the League Cup, with Richards now very much a first-team player with 32 league appearances under his belt, though the rise up the leagues would be put on hiatus following Sirrel's departure to Sheffield United.

Richard continued to be utilised by the following man in the dugout, Ron Fenton, and the defender made 41 appearances in the league as the Magpies finished eighth in 76/77.

Notts began the 77/78 season badly and Fenton was sacked in early October, while Sirrel hadn't had the best time at Bramall Lane, which led to the two reuniting and then, as we all know, the rest is history.

Richards continued to star in the County backline in the ensuing years and, in 80/81, was a crucial component of the team that was promoted to the top flight, making 40 appearances in the league that season.

Despite the leap to the top division of English football, Richards continued to impress for Notts as they enjoyed a three-year stint in the big time.

Sadly things would not turn out well for Notts as they suffered back to back relegations and were back in the third tier for the 1985/86 season, Richards's last one at Meadow Lane.

Richards made just 20 appearances in the league that season and was given a free transfer in December, although he was also granted a testimonal at Meadow Lane.

Afterwards, he turned out for the likes of Boston United, Arnold Town, Oakham United, Rolls Royce Celtic and Corby Town on a semi-professional basis.

All in all Richards made 485 appearances for Notts, his sole Football League club, in an illustrious career.

Tragically, Richards died of a rare strain of pneumonia in 2001, just two days before Christmas, aged 45. Hundreds of mourners attended his funeral in The Meadows on New Year's Eve.

Pedro Richards ticks all the boxes - he came through the ranks at Notts County, he spent his entire professional career with them, he helped them into the top flight and kept them there, he played against some of the best teams in the world, and he was a seriously nice person.

Therefore Pride of Nottingham is delighted to honour him among our Notts Alumni.

Share your memories of Pedro Richards on Pride of Nottingham by signing up to the website, visiting the forum and joining in the chat with hundreds of fellow Notts County fans.