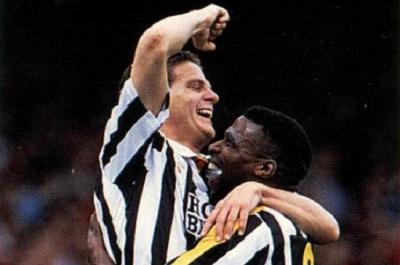 Born in Sheffield on 12 February 1962, Phil Turner began his career at Lincoln City, making his first-team debut for the Imps in 1979.

A combative central midfielder, Turner won promotion to the Third Division in 1981 under Colin Murphy, and formed midfield partnerships with Glenn Cockerill and then Neil Redfearn during his time at the club.

In May 1985, Turner was in the Lincoln team that faced Bradford City in a Third Division clash at Valley Parade and witnessed the horrendous events of the stadium fire which tragically claimed 56 lives.

In 1986, his spell at Sincil Bank would come to an end as he joined Grimsby Town, for whom he would make 62 appearances, but he left in 1988 for Leicester City, and then only spent one season at Filbert Street.

Turner's subsequent move was the one that would yield the most glory as, in March 1989, he moved up the East Midlands to Notts County in a £125,000 deal which also saw Gary Mills move the other way.

The then 26-year-old hit the ground running as he made 16 appearances for the Magpies as they finished ninth in Division Three under Neil Warnock, who had taken over earlier in the year.

It wouldn't be long before Warnock gave Turner the captain's armband and, under his leadership, Notts would embark on a magical rise up the leagues.

In 1989-90, Turner made 47 appearances as the Magpies finished third in the table and subsequently navigated the playoffs, captaining the side in their Wembley final win over Tranmere Rovers, and Turner was awarded Player of the Season for his contributions.

And the heroics from both player and club continued the following season as Notts cruised to a fourth-placed finish in Division Two and subsequently did it again in the playoffs, beating Brighton & Hove Albion in the final to reach the hallowed top flight - Turner did his bit with the opening goal in the semi-final first leg against Middlesbrough.

Turner had two more Wembley captaincies in him as he twice skippered Notts in two consecutive Anglo-Italian Cup finals, and by the time he departed Meadow Lane in 1996, he had made 284 appearances for the Magpies, scoring 29 goals, and was POTY once again, in 1994.

County was the last club that Turner turned out for, subsequently taking on the job of assistant manager at Grantham Town, and according to The League Paper, he also worked in community care in Derbyshire.