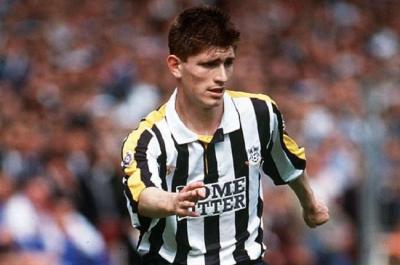 Tommy Johnson, born in Gateshead on 15 January 1971, knew he wanted to play for Notts County from his first trial at the club as a teenager.

In a 2013 interview at the annual Notts County Former Players' Association dinner, where he was presented with an Achievement award, he spoke of how he fell in love with the Magpies.

“I was 13 and I came down for trials and the first training session was with Jimmy Sirrel and that was the sort of club it was,” he said.

“All the players made you feel so welcome and, although my family wanted me to stay at home and play for Newcastle, I knew I wanted to play here and I’ve been here ever since.

“My time here was great and I couldn’t have had a better start to my career.”

Johnson joined Notts in 1987 as an apprentice after leaving school and such was his talent that he was a first-team regular by the end of the decade.

His prolific goalscoring helped Notts climb from the third tier to the First Division between 1989 and 1991, and in total he scored 57 goals in 149 appearances.

In 1992, Johnson left Meadow Lane and moved down a division to Derby County in a £1.3m deal.

His time at the Rams was fruitful as he claimed 30 goals in 58 appearances, but two playoff defeats in three seasons later, he decided to up sticks again, joining Aston Villa in 1995 and making his debut in the Premier League.

Johnson's future at the highest level looked promising as he scored four goals in 14 league games to help Villa stay in the Premier League.

However, he found his first-team opportunities limited as manager Brian Little signed Serbian striker Savo Milosevic, and Dwight Yorke was converted from a winger to a striker.

In 1996–97, Johnson was still unable to displace Yorke or Milosevic, managing just 20 league games and four goals, before he joined Scottish giants Celtic for £2.4mi on 27 March 1997 – transfer deadline day.

Despite seeing his career at Parkhead plagued by injury, he enjoyed some success at the club, including scoring the goal that won the 2000–01 Scottish Premier League title, and scoring in the 2000 Scottish League Cup final win over Aberdeen. He had also collected a title medal in 1997–98.

During his time at Celtic, Johnson was briefly loaned out to Everton in the autumn of 1999, where he played three times in the Premier League but failed to score.

A brief spell at Sheffield Wednesday followed before Johnson joined Kilmarnock and then Gillingham in December 2001. After two seasons at Gillingham, Johnson joined Sheffield United but only made one appearance there before moving on to Scunthorpe United.

During his time at the Iron he was loaned out to Tamworth, finally joining them on a permanent contract and staying there until the summer of 2006, when he joined Midland Football Alliance club Rocester.

After hanging up his boots, Johnson went into coaching and ended up rejoining Notts as part of the coaching staff under the management of Ian McParland on 1 November 2007, where he stayed until 2011.

Following on from his coaching spell at Meadow Lane, he worked at the Irish Football Association as a scout between January 2012 and August 2013, before a spell as Senior Overseas Scout at Cardiff City.

Johnson then became a coach educator for UEFA A and B licences at the IFA before taking a job as the head of player recruitment at Blackburn Rovers, where he continues to work today.

Share your thoughts about this Notts Alumni feature on Tommy Johnson on Pride of Nottingham by signing up to the website, visiting the forum and joining in the chat with hundreds of fellow Notts County fans.