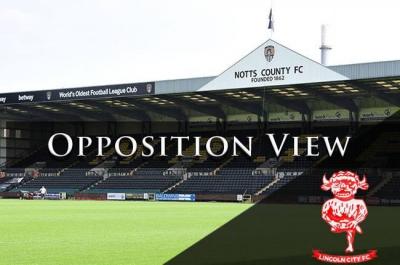 This week, we have a surprise for you on Pride of Nottingham - we have not one but two Opposition Views for this weekend's League Two clash between Notts County and Lincoln City.

Alongside our chat with Luke Kempson, we have also spoken to 20-year-old Andrew Bruce (@andrewbruce97), who has given PON another great insight into life as an Imps supporter.

About Andrew: Truth be told, I’ve only been watching City since 2015, and I’d describe myself as being a fan since late 2016. I got into the club after moving to Lincoln in September 2015 to study at the university and have regularly watched games ever since. As I have only supported City for a short time I don’t have a huge array of players to pick from, but it is a tough pick between Sean Raggett and Alex Woodyard. As Raggs has actually moved on now (but is back on loan from Norwich) I’ll have to say Woodyard – a proper fans’ favourite.

Q1- You guys were in non-league for a number of years. What went wrong and how has it been put right?

Well, as just stated I wasn’t around the club at that time, and I can’t imagine how awful it must have been. I have read a lot about that period though and what I can gather is that Chris Sutton quitting as manager was a blow. Yes, he was a contentious figure, and made some awful loan signings, but he wasn’t helped by board disagreements over budget and FA Cup funds not being made available to him. However, the general consensus is had he stayed longer into his second season we would have stayed up in 2010-11. After he left relegation was almost inevitable.

I think what changed was partly the fan group, the 617 Squadron, forming in late 2011 – and Bob Dorrian, the chairman, really stepping up and putting everything on the line to keep City afloat. Although it was 6 years in non-league, it was 6 years of a sort of stability that made people really appreciate the club – how it could have been taken away with that relegation and that this was a chance to build the club back up to where it belonged.

Q2- Danny Cowley has been a revelation - just what makes him so special?

Oh, Danny. What a man. Don’t forget about Nicky though too! The brothers are special in that this is their first professional job, and first time in the Football League, so they are giving it absolutely everything they’ve got. Their man-management is exceptional – they are people who players want to play under, and the way they keep the team going is unbelievable. This team never stop – we scored a lot of late goals last season and it was certainly no fluke, so the energy Danny and Nicky have instilled into the team is crucial. Also, his inherent belief in statistics and sports science played a huge part in the success of last year, and it is an approach not seen often in this level of football.

Q3- You enjoyed a good cup run last season - can you give us an assessment of it?

The cup run caught a lot of people off-guard I imagine, especially as it started so inauspiciously in the qualifying round against Guiseley. My first game of the competition was the 1st round against Altrincham, and from what I remember we were fairly poor that game – edged out the side in a division below us and definitely didn’t look like a cup-run sort of side. The next round against Oldham was the turning point not just in the Cup, but the season. There were over 7,000 fans inside Sincil Bank, which was unheard of at that stage, and it was the perfect game. Up 3-0 by half-time against a team 2 leagues above you, then concede 2 quickfire goals midway through the 2nd half, so you’re left so on edge for the last 15 minutes you’re in the row below! And as if that wasn’t bad enough, we could barely see the action in the last 5-10 minutes as heavy fog came down and made visibility almost non-existent. It all just added to the game though and made it that bit more special.

The Ipswich games were when Lincoln first really caught the attention of the nation, and we were unlucky not to win at Portman Road – over 5,000 Imps made the journey, and the ‘Impvasion’ hashtag was born. But a draw meant that a replay at the Bank, under floodlights and on BBC 1 was required, and the feeling when Nathan Arnold rounded the helpless Ipswich keeper was indescribable. I’d said to my mate minutes earlier “we’ve scored a lot of late goals this season, we could do it again” and then it happened. Yes!

Brighton was when most people expected it to end I think, especially when they went 1-0 up – what was I thinking when I thought we could win – they were leading the Championship for goodness sake, what did you expect?! But that penalty from Alan Power and Theo popping up again meant we were in dreamland – we’re going through, and surely we’ll get one of the big boys this time?!

No disrespect to Burnley, but the draw was a bit of an anti-climax – we’d earnt a huge tie – a Chelsea, Man United etc, but got Burnley. Now we were definitely going out – Burnley had just drawn against Premier League champions-elect Chelsea the previous week, we had no chance. Their team was fairly strong, but I was determined to enjoy the day, particularly since it was the first Cup away game I’d been to. What. A. Day. No words could give an assessment of that Burnley game – the split second when the David Fishwick stand had our hearts in our mouths, eyes glued to the referee as he looked at his goal decision watch…had Sean Raggett’s header crossed the line? He pointed back to the halfway line and blew, and then it was all a blur. Mental.

The Arsenal game really was just a day out, no more than that! Obviously, we all wanted to win, and had hopes of Arsene playing a weak team, but when we saw Koscielny, Ramsey and Sanchez we knew it was over. If only Nathan Arnold had scored that chance in the first half...

What a cup run that was though, something that will never be repeated in Lincoln’s history I’m sure, and will take some beating from any non-league side in the future. Not only was it enjoyable on the pitch, but the revenue gained from it was a massive financial boost and has left the club in the black for the first time in years.

Q4- With Notts, Lincoln, Chesterfield and Mansfield all in League Two this season, which game are you looking forward to the most?

A lot of good derbies in there, and that’s without mentioning Grimsby! But I think after the recent Mansfield match, and how much of a controversial figure Steve Evans is, the away match at Field Mill in January is one I’m particularly looking forward to. Seeing Terry Hawkridge back at the Bank for Notts County at home will be nice as well, providing he doesn’t score at the weekend!

Q5- Terry Hawkridge has done well for Notts so far. How will you greet him on Saturday?

I’m sure Terry will get a great reception from Imps fans – he left for all the right reasons. He didn’t force his way out or anything like that, he was offered a 1-year deal from City, but a 2-year deal from his hometown club, and arguably a ‘bigger’ side in Notts County. We can all see why he left – plus, towards the last part of the season he was in and out of the team a lot and when he did start he was often the first substituted player, so from his point of view it made sense. It was sad to see one of the heroes of last season go, but we’ll always have those 2 goals against Macclesfield – unforgettable.

Q6- Who are your key players this season, and what do you think the score/scorers will be?

Although Sean Raggett is only back with us on loan until January he will be vital, as he was last season and so far, this season – he won back-to-back MoTM awards recently. Alex Woodyard does everything all over the pitch, and as the chant goes, he “never gives the ball away!” And finally, Matt Green is our key forward, with electric pace and a poacher’s instinct we’ll be relying on his goals this season. With the way Notts County have started the season this will of course be a tough game, but we’ve been great away from home of late. I’ll go for a 1-1, with Matt Green scoring for City.