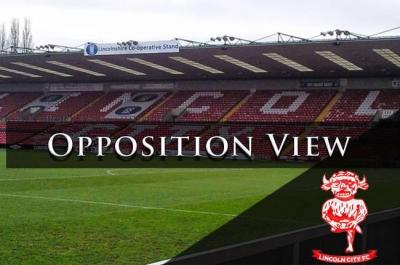 It feels like an age since we were last in League Two action given the glut of festive football followed up by the FA Cup and then nothing for a whole week!

But here we are again in league action as we take on local rivals Lincoln City at Sincil Bank this weekend.

Pride of Nottingham has spoken to Imps fan Sam to get an insight on the opposition for Saturday's short trip away.

About Sam: I'm 25, been supporting the team since I was a kid with my dad taking me to games, and my favourite player of all time is Simon Yeo.

How have Lincoln done so far this season?

Amazingly. As a promoted side, there's always that anxiety in the back of the mind of how we'll do in the higher up league, but to be sitting in the playoffs and boasting such great form, we can keep on dreaming of back-to-back promotions, but we're just enjoying the ride.

If things are going superb this season, the calendar year was pretty much perfect. The FA Cup run was the stuff of dreams and then ending the season with promotion before continuing the good form in League Two, well let's just say we hope 2018 will be just as amazing.

Who have been your standout players this season?

Most of the squad has been superb, but Michael Bostwick - what a signing he's been. He's a beast in midfield and in our Checkatrade game against Rochdale the other day played centre-back and was immense. But really, I can name so many quality players - Matt Green, Alex Woodyard, Neal Eardley, Harry Anderson and Matt Rhead just to name a few.

Are you happy to see Terry Hawkridge delivering for Notts?

Absolutely. His goals secured Lincoln the title last season and even though many fans didn't want him to leave, it's fair enough for him to join his hometown club. Also he didn't celebrate when he scored against us so yeah, happy to see him prospering.

Where do you think you'll finish this season?

I would love a top-seven finish and a go at the playoffs, though promotion may be a bridge too far this season. I'll be delighted with a top-half finish and hopefully the squad can develop even further and mount a proper promotion challenge next year.

2-0 to Lincoln, Matt Rhead with both goals!