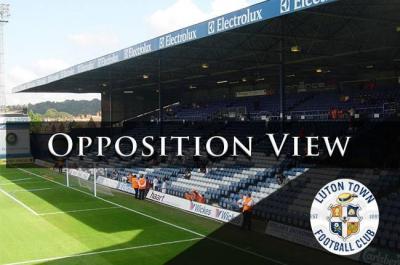 For all the excitement of reaching the third round of the FA Cup (and the ensuing anti-climax at drawing Brentford away), all that must now be stashed away until next month because now it's time to refocus on the league.

And as fixtures go, this weekend's encounter is probably the most taxing we are bound to have all season (except for an away derby) - Luton Town away.

The Hatters are top of League Two and their goal difference is frightening - they've been smashing goals in all season (48 scored in 20 games) and have a mean defence (18 conceded).

Ahead of Saturday's crunch clash at Kenilworth Road, Pride of Nottingham spoke to Luton fan James Hall (@LTFCJames98) to get an insight on the opposition.

About James: I'm 19 years old been a fan from as young as I can remember, and my favourite player is Marek Stech.

Q1: What led to Luton's slide down the Football League and into the Conference, including that infamous 30-point deduction in 2008-09?

The sale of key players for club record fees in our last Championship season and Mike Newell's demand for replacements capable of keeping us up failed as there were many sales and replacements were very few and far between. From then we struggled and just slid down the leagues until we eventually got our -30 in the 08/09 season. Possibly the worst season for us Luton fans.

Q2: It took four years for Luton to go back up into League Two - how did you navigate the non-league period and what finally led to the club going back up?

Every season we played in the non-league we found ourselves high up in the tables, often missing out on automatic promotion due to lack of consistency unfortunately. After several heartbreaks in the playoffs, some fans were starting to think it wasn’t ever going to happen. However, after employing an experienced non-league manager in John Still in 2013 things seemed to take a turn for the best, in his first full season as Luton manager we ended the season as champions, no doubt because of the goals of one man, Andre Gray! What an enjoyable season that was.

Q3: Do you think the club would be in a different position had they stayed in the top flight when it was rebranded as the Premier League instead of going down the season before, like Notts did?

Yes, without a doubt because the influence of the Premier League money would have enabled us to make positive changes, since then money has become a massive factor! I won’t complain too much though, much more competition and passion down here!

Q4: The club has two main colour schemes, white and black, and orange, navy and white. Why is this the case, and which is your favourite?

I’m not too sure why the colour scheme changed, however I do know that the black and white was used first back in 1920, then it was modified to the orange which has been used mostly since. My favourite has to be the famous orange of Luton Town, puts a bright noticeable colour into the stands of Kenilworth Road!

Q5: Luton are right up there at the top of League Two and boast an impressive goal difference - do you think you'll win the title and what other three teams do you think will go up into League One?

With the squad we have to hand this season it’s difficult to see us not getting promoted, our goal difference at this stage is phenomenal, scoring 7 three times this season! Of course we are flying but there are also a few other teams that have the squad capable of such things. Notts are having a strong season as well, sitting on the same amount of points means they are right on our backs. For me, I think we will win the league, however it will get close! Notts, Exeter and Wycombe are my other promotion candidates.

Q6: Who are your danger men, and can we get your score and scorer prediction?

Danny Hylton is definitely one to watch with 13 this season but also more recently and surprisingly Dan Potts, our left-back, scoring 6 this season. My prediction For Saturday is Luton 3-1 Notts. I think we will step up now against second place and produce probably our best result of the season, Hylton scoring two and Luke Berry getting one with your star player Jorge Grant getting your goal!