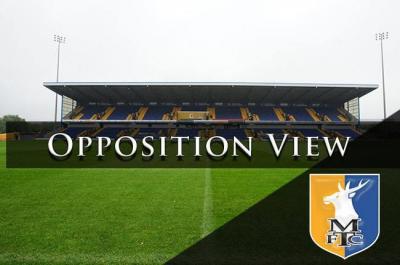 It just gets better and better for Notts, who sit proudly atop the League Two table following impressive wins over Lincoln City and Exeter City.

But now, arguably the biggest clash of the season for the Magpies, a trip to the One Call Stadium to face Mansfield Town this Saturday.

Pride of Nottingham spoke to well-known photographer, Billy Davies 'nemesis' and Stags fan Dan Westwell to get the lowdown on his beloved team.

What do you make of current owner John Radford?

I love him. I can’t thank him enough for rescuing us 7 years ago. He’s put a lot of money into the club to get us out of that hellhole we were in for 5 years. I really hope we go up and even if it’s for just one season, I’d love it for us to get to the Championship to fulfil his dream & reward him for everything he has done for us.

You were tipped as promotion contenders at the start of the season - what do you make of that tag?

I think it was the bookies' ignorance. They looked at Steve Evans record of 9 promotions and the fact that we got our business done straightaway & it just made them stick us up as favourites. I think Luton, Exeter, Coventry, Swindon, Wycombe, Cambridge, Carlisle, Crewe, Port Vale should all have been above us in the odds table but the bookies aren’t usually wrong, let’s hope they’re right again in May.

Steve Evans is a very Marmite manager - are you impressed with him as your manager?

When he was appointed I kept pinching myself as i couldn’t believe how lucky we were. I still think we’re lucky although some of his antics are getting a bit embarrassing at the moment, but that’s Steve Evans. Marmite is a brilliant description of him. I would say more people hate him than like him, but i would also say that most clubs in L1 & L2 would love to have him as their Manager, as he’s been there and done it. His experience could be the difference between going up and not going up. He did well by getting all of our signings sorted in June/July, but that made a lot of ignorant people say “Mansfield are spending millions” and “Steve Evans is going to bankrupt Mansfield” but what they didn’t see is that he released 11 players and signed 11 players more or less in the same couple of weeks. Matt Green was on a big wage as were a couple of others, so getting rid of them made us able to sign proper quality players from League One. I don’t think we needed all the players we signed as we had the 4th best defensive record out of all 92 clubs last season, then he goes and signs 3 defenders, but he knows what he’s doing so we have to trust him.

There are several East Midlands derbies in League Two this season - which is the biggest for you?

The biggest derby for all Stags fans is Ch*sterfield. There is pure hatred there. I know there’s a few Notts fans who hate Stags but I’m afraid the feeling isn’t mutual with most of us. I always call our game ‘the friendly derby’ because that’s how we look at Notts. Don’t get me wrong we love to beat Notts the same as Ch*sterfield, but if you gave us a choice of who to take 6 points from, it would be the woolly ones every time.  Lincoln is another derby game that’s tasty, on a par with Notts. There’s always a few idiots from all 3 clubs who like to cause trouble, as we’ve seen over the years. To back up my ‘friendly derby’ comment, we bring more fans to Notts than we get for home games, because people enjoy the trip to Nottingham, a few beers at the waterfront, Hooters, it’s easy to get to by train and of course with us not having electricity or water over in Mansfield it’s a big treat to visit a big city!

Who are your squad's danger men?

It’s hard to predict our danger men because on paper we’ve got a lot but on the pitch we’ve not really shown much danger apart from a brilliant 80 minutes against Luton. There’s a few who if they show their true potential will be a great asset. Paul Anderson, Jacob Mellis, Will Atkinson, Alex MacDonald, Calum Butcher & Alfie Potter all have got the potential to be match winners on their day and have got experience in the Championship/L1. We’ve also got former Notts defender Krystian Pearce who was player of the season last year. He scored twice against Grimsby recently so I’m sure he would like to grab a goal against his old club.

What do you think the score/scorers will be?

Predicting the game is impossible. My heart says we’ll win 2-0, my head says we’ll lose 0-2. I’d take a point if it was offered now, so I’ll go for a 0-0 draw and get splinters. May the best team win and hopefully it’s football that we’re talking about after the game.