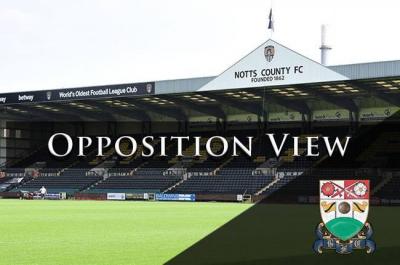 Notts County have had a bit of a downturn in form, with their derby defeat at Mansfield Town followed up by a woeful performance against Forest Green Rovers that ended up as a draw by sheer miracle.

The Magpies will hopefully have regrouped over the last seven days as another relatively winnable game awaits, a home encounter with Barnet.

Although the Bees are not exactly setting League Two on fire, neither were FGR, and look how that turned out, so here's hoping Notts will have gone back to basics and got themselves back up to scratch.

Pride of Nottingham spoke to Barnet fan Dan to get an insight on Saturday's opposition.

1) London famously boasts 12 clubs in the Premier League and Football League - who are your biggest rivals?

Historically our fiercest rivals were Enfield, while Wealdstone are our current main enemies. In terms of league encounters, any match between ourselves and other London teams tend to have a bit extra spice, but it's just us at present from London in the league. Closest thing this season would be Luton but we don't really see them as proper rivals.

2) What was it like when legendary midfielder Edgar Davids became manager of your club?

At first it was pretty surreal, to see such a world-famous player rock up to Underhill and take the reins, and he did pretty well at first, though we ended up going down on the final day due to our woeful start-of-season form. In the Conference, his relationship with the fans became strained as it seemed like he was hogging the limelight and, with the team pretty much out of contention for the playoffs by January, he resigned. Started well, ended sour, but was definitely a memorable experience.

3) Martin Allen is remembered fondly at Meadow Lane - what do you think of him at the Hive?

On one hand he has given Barnet some good times - in his last spell (fourth) with the club, he took an average Conference side and turned them into champions within a year and left with the club in the top 10 of League Two. On the other hand, he did ditch us for Eastleigh, who were waving their chequebook, and just days before leaving, he sold one of our key players to them - ironically, neither of them were at their new club for very long!

4) Looking from the outside in, Tony Kleanthous seems like a very involved, hands-on chairman. What's he like?

No complaints about him whatsoever. He's been a very good chairman for Barnet over the years, has kept us financially stable, invests in the club, and in terms of managerial appointments, has a decent record.

5) Who are your danger men?

Shaq Coulthirst has had a great start for us, with six goals and three assists so far in the league and was voted the Player of the Month. Then there's John Akinde, who has scored over 20 goals in each of the last two seasons in League Two and he's back from injury now, so once he hits top form again, he'll be dangerous.

I'm hoping we can pounce on County's recent poor form and claim a win. I'll say 2-1 to Barnet, Coulthirst brace.

Share your thoughts about this opposition view article on Pride of Nottingham by signing up to the website, visiting the forum and joining in the chat with hundreds of fellow Notts County fans.