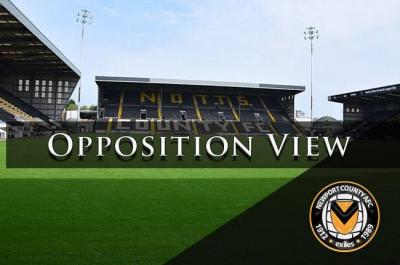 Notts County return to League Two action on Saturday with a home game against Newport County.

The Exiles experienced two torrid seasons back to back but survived both times, and now they sit sixth in the standings.

Pride of Nottingham spoke to Newport fan Frank ahead of the game at Meadow Lane to get an insight into his team.

1) Charlie Hopkins has recently resigned as a director at Newport and has spoken of a split in the boardroom - how have things been off the pitch at the club in recent years?

Hopkins's resignation letter, which was leaked to the press, was damning in its content - he basically said there was a split in the boardroom and that he could no longer work with some of his fellow directors. Just a few weeks earlier, our old chairman - who was also supposedly at loggerheads with the other directors - resigned, so it seems to be a bit of a power struggle up top at the minute. The board has been very hush-hush in the last few years, a lot of secrecy, and obviously fans want communication to be more transparent with regards to what's going on exactly.

2) You've finished 22nd in League Two the last two seasons but ninth the one before - what led to such a decline in fortunes in recent years?

In summer 2015, our previous chairman Les Scadding resigned - he had won the Euromillions a few years before and invested in the club - and the Supporters' Trust took over, but with a lower budget, players having to be sold, managerial changes and so on, form naturally took a tumble.

3) Newport have several former Notts players in their ranks like David Pipe, Joss Labadie and Scot Bennett - how have they been doing at the club?

David Pipe's a Newport legend, pure and simple - he's had several spells at the club, gives his all and is a very passionate player - he's definitely improved and mellowed out a bit since his earlier spells too. Joss Labadie is our captain and has been very good for us, although he is a bit of a loose cannon - though at least he's not done his Luis Suarez impression while here! And Scot Bennett was impressive in his loan spell from you guys and since joining us permanently he's been solid both in defence and midfield.

4) Who are your club's danger men?

As you know, Labadie is a cracking midfielder, and he has formed a great partnership with Ben Tozer and Matty Dolan this season, but sadly he's been ruled out for at least a few weeks with a hamstring injury. And up front, Frank Nouble and Padraig Among are dynamic players who have bagged a fair few goals between them, while Shawn McClousky has been used sparingly but also knows where the goal us.

Even without Labadie, I fancy us to continue our good form - 3-1 win for Newport, Amond and Nouble to get three between them.