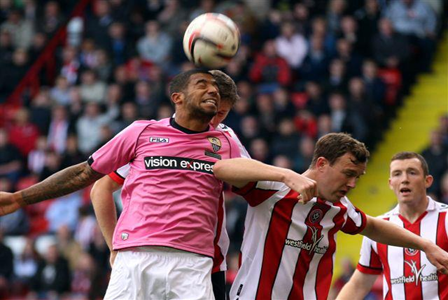 In a sense, this is an indirect gem for those amongst us who enjoy the speculation and prediction phases of the modern game and present us with a robust challenge.

The challenge of predicting the composition of the league table come the end of the season has thankfully already been undertaken here on Pride of Nottingham. This leaves me with the slightly easier, but still baffling task of dissecting and digesting what may happen come 9:35 on Friday.

I must admit, I was slightly worried with the departures of Judge, Hughes and Kelly. A few holes were appearing in the squad and as a Notts fan it is always hard not to feel uneasy. Alas those holes were filled in as quickly as they appeared and it must be said both the backroom and playing staff have done a sterling job in replacing and building what was lost.

Dumbuya, Fotheringham, Bell and of course Haynes have entered the squad and seem to have provided grit to the cause so badly needed in League One. Perhaps it is thought, rightly so, that passion and determination are more important on a wet and windy night up in the far North in January than raw technical ability. Thus with Fotheringham already talking like a leader off the pitch, it is thought he can add character to the tough personalities within our squad.

Yoann Arquin looks reinvigorated. His goal against Ipswich was a sign more of confidence than of a change in ability. Alan Sheehan remains at Left Back and the solid trio of Bart, Liddle and Leacock are enough to build any great League One side. With some great fixtures and performances across pre-season it is fair to say that nothing bad can be said or aligned to the way in which Notts will have prepared for Friday.

A few murmurings of impending signings from Scotland nestle themselves at the glee of fans wanting to see even more quality brought to the side. For the purposes of Friday’s game, we shall leave it to you to speculate on these quietly spoken words.

Thus, with Notts looking in respectably fine shape heading into Friday’s game, what can we expect from Sheffield? They harbour a new manager at the helm in the form of David Weir who has wasted no time in imposing himself on a rather flat side who lost out in the play-offs of last season.

Febian Brandy, remember him? He has been brought into the side along with Lyle Taylor, a 23 year-old who netted 29 times for Falkirk last season. Conor Coady has come in on-loan from Liverpool to support the other end of the United side already boasting Liverpool first team appearances.

Both sides will want to start with three points, talk about stating the obvious. But I don’t see either team being too open at the back. Important to start out well and accumulate points early on, I fail to see either side willing to take too many risks in going for broke to fulfil this theory.

A front two likely to compose of Haynes and Arquin, will both be raring to make a goal scoring debut in the 2013/14 season. From my perspective though, I would be very happy to come away with a point and see a good solid performance with lots of potential demonstrated.

It would not be far off in saying we are about equal with Sheffield United going into this match in terms of new signings and pre-season activity. The bookmakers tell a different story though with United best priced 20/21 to win with Notts a 10/3 shot. Reputations should be avoided with no competitive matches having been undertaken at this point and thus my prediction for this Friday is a good display with a 1-1 draw. Or, if I’m being cheeky, a 1-0 victory to Notts.