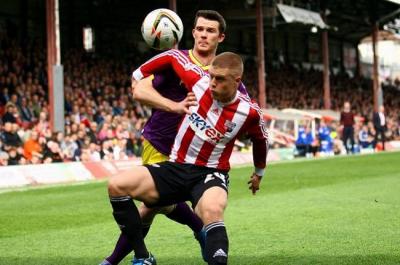 Head to head and stats

Brentford and Notts County will be meeting in for just the second time in the FA Cup, the Bees winning 4-0 in their only competition encounter in December 1964.

Both sides have met 75 times in competitive action, the first game taking place on 24 September 1930 in Division Three (South), a 2-2 draw.

Our last fixture took place on 5 April 2014, a 3-1 defeat for Notts at Griffin Park, the Bees subsequently going up into the Championship.

Notts haven't beaten Brentford since 28 February 2004 in Division Two. Eight consecutive draws then took place before the Bees won the following four games against the Magpies.

Brentford have lost their last five FA Cup games against league opposition since drawing 2-2 with current holders at the time Chelsea in January 2013, eventually losing the replay 0-4.

The Magpies are in the third round for the first time since 2012, progressing to the fourth round on the last three occasions they've reached this stage.

Brentford FC started life in 1889 because the members of the Brentford Rowing Club wanted to engage in a sport as filler during the winter months. By 8 votes to 5, they opted for football instead of rugby.

Notts legend Tommy Lawton played for Brentford directly after his talismanic spell with the Magpies, scoring 17 goals in 50 games between 1951 and 1953.

Lawton also served as player/manager in his final year with the club before leaving for Arsenal.

Brentford is a popular team with many musicians who grace the pages of NME. Hard-Fi lead singer and guitarist Richard Archer, Bluetones guitarist Adam Devlin, Status Quo bassist John "Rhino" Edwards, The Who guitarist Pete Townshend and Yes keyboardist Rick Wakeman are all supporters of the Hounslow club.

Gunnersbury Park Museum is in Gunnersbury House, narrowly in Gunnersbury (the north-west of Chiswick) containing artifacts and former furnishings of the Rothschild family, who were culturally and financially pre-eminent across France, Germany, the Netherlands, the United Kingdom and North America (basically, one of the most powerful families in the world).

Kew Bridge Steam Museum houses the world's largest working beam engine and its narrow cuboid tower is an emblem of the town.

Striker Emiliano Marcondes may make his debut for Championship Brentford after being a substitute in the defeat to Wolves.

Midfielder Alan Judge is expected to face his old club in his first game in 21 months following a broken leg, but left-back Rico Henry is out with an injured knee.

Lewis Macleod is another looking for game time as he builds up his fitness following a cruciate ligement injury.

Notts midfielder Liam Noble is finally set to make his first appearance since returning to the club, while the Magpies could also welcome back veteran striker Shola Ameobi.

Rob Milson might be involved again after injury while the likes of Carl Dickinson, Nicky Hunt, Terry Hawkridge and Alan Smith are options should Magpies manager Kevin Nolan wish to make changes.