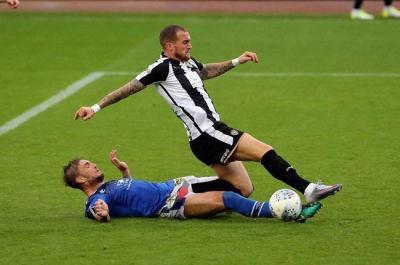 Notts have met Carlisle 34 times in their history.

Notts are unbeaten in their last three against Carlisle, winning two and drawing one.

This fixture rarely ends in a draw with only one game between the two sides in the last 15 meetings, ending in a draw.

Notts are winless in their last seven league games but they put in a better performance last time out, away at Morecambe.

This will be Steve Chettle’s last game in caretaker charge before Neal Ardley takes full charge on Wednesday.

Carlisle have fared a lot better away from home this season. They have lost six of their ten home games but have won five of their nine away games. Their last away game ended in a 4-0 win at Swindon.

Carlisle have reached the final of the Football League Trophy more times than any other club (6).

They were elected to the Football League in 1928.

In 1972, The Cumbrians beat Roma in the Anglo-Italian Cup. The Italian side would go on to win the tournament that year.

They were top of the first division three games into the 1974-75 season.

Jon Stead and Kane Hemmings will return to the Notts squad after not being risked at the weekend against Morecambe.

Enzio Boldewijn requires a knee scan to assess an injury he picked up on Saturday.

Ben Hall is still recovering and is continuing taking up non-contact drills in training.

Kelvin Etuhu returned from a hamstring injury at the weekend in Carlisle’s loss against Forest Green, coming on as 64th minute substitute.

Defender Tom Parkes was not risked in Saturday’s game, also coming back from a hamstring injury.

Carlisle skipper Danny Grainger missed The Cumbrians game on Saturday and may miss Tuesday’s clash with Notts, with a calf injury.