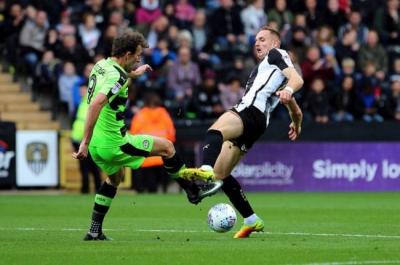 Notts County and Forest Green Rovers have met three times in competitive action and the Green Devils have not beaten the Magpies yet.

The first game came in the third round of the FA Cup on 19 January 2010, and it ended in a 2-1 win for the Magpies at Meadow Lane.

Last season was the first that both teams were in the same league, with their first league encounter finishing 1-1 thanks to Rob Milsom's injury-time equaliser (and he's now back with us so wonder if he can repeat it).

Notts County have failed to win all six of their games in all competitions this season.

They started decently enough with a 0-0 home draw against Colchester United but went on to lose their next four in League Two, though they did only lose to Middlesbrough on penalties in the EFL Cup.

Likewise, Forest Green are out of the cup but they remain unbeaten in the league.

That said, they have drawn four on the trot in the league.

Their last win in any competition came on August 14 in the EFL Cup against Swindon Town but haven't won in the league since the opening day.

The name Rovers was adopted in 1893, and the following year the club were founder members of the Mid-Gloucestershire League, the first association football league in the county outside Bristol.

After the league folded in 1902, Forest Green become members of the newly formed Stroud League and also members of the Dursley and District League which they won in 1903, the club's first silverware.

After a break for the First World War, Rovers enjoyed a period of great success winning two football leagues and three cups in both 1921 and 1922.

They then joined the newly formed Gloucestershire Northern Senior League with Cheltenham Town among others in 1922.

Rovers joined the newly formed County League in 1968 and played under manager Peter Goring for the next 11 years, moving up again to the Hellenic League in 1975 under his stewardship.

In 1982, Rovers achieved fame at Wembley winning the FA Vase 3-1 and at the same time winning the Hellenic League and moving into the Southern League Midland Division.

Seven years later a struggling Rovers outfit was renamed Stroud FC but this alienated a lot of people connected with the club, until the arrival of Trevor Horsley in 1992 saw the name changed back to Forest Green Rovers.

After finishing eighth in the Southern Division under Frank Gregan in 1995–96, they won the division the following season, earning promotion to the Premier Division of the Southern League.

The 1997–98 season then saw FGR them win the Southern League Premier Division, securing a second successive promotion and entry to the Football Conference.

FGR finished in the relegation zone in 2005 and 2010, but both times were handed a reprieve when Northwich Victoria and then Salisbury City were demoted for non-footballing reasons.

The club was then taken over by Ecotricity owner Dale Vince, at which point the team improved until finally sealing promotion into the Football League in 2017.

Notts defender Richard Duffy hobbled off at Lincoln City with a foot injury and is likely to miss out alongside Matt Tootle who has a shoulder injury.

New manager Harry Kewell will not take the reins against FGR, with Jon Goodman and Mark Crossley overseeing proceedings.

Farrend Rawson missed Tuesday's EFL Cup tie with a foot issue but is expected to be back for FGR.

New signing Nathan McGinley could also make his debut at Meadow Lane after the defender joined from Middlesbrough on Wednesday.