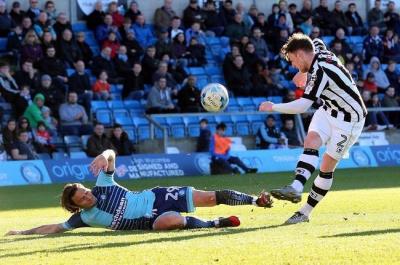 Notts County and Wycombe Wanderers have faced each other a total of 35 times over the years, with the first meeting coming as late as 1995, when the Magpies won 2-0 at Meadow Lane.

The Chairboys have beaten Notts 16 times and drawn nine games, while we have beaten them 10 times.

In 1887, a meeting held at the Steam Engine public house in Station Road, High Wycombe saw the formation of Wycombe Wanderers FC.

It is highly likely the club was named Wanderers after the famous Wanderers, winners of the first FA Cup in 1872. The club played just friendly matches between 1887 and 1896.

The club decided to pursue amateur instead of professional football and joined the Great Western Suburban League and remained there until the outbreak of the First World War.

After the hostilities had ended the club joined the Spartan League in 1919 and were Champions in successive years. In March 1921 the club's application to join the Isthmian League was accepted.

Wycombe enjoyed a fairytale season in 2000–01 as the club reached the semi-finals of the FA Cup. First Division sides Grimsby Town, Wolverhampton Wanderers, and Wimbledon were all beaten before a memorable quarter-final with Premier League side Leicester City.

In a game that has gone down in FA Cup history, striker Roy Essandoh headed an injury-time winner to seal a 2–1 win at Filbert Street as manager Lawrie Sanchez looked on from the dressing room, having been dismissed from the touchline during the game.

The ensuing semi-final at Villa Park saw Liverpool pushed all the way before claiming a 2–1 victory.

Both players were both away on international duty with Northern Ireland and Gibraltar respectively.

Midfielder Michael O'Connor could return to the first-team fold almost a year on from suffering a ruptured anterior cruciate ligament in his right knee.

Wycombe will hope to be able to call upon the services of midfielder Luke O'Nien, who sat out the goalless draw against Port Vale last Saturday with an injury.

Middlesbrough loanee Nathan McGinley is expected to recover from illness to be available.

Defender Dan Scarr will miss out with an ankle problem with fellow centre half Anthony Stewart and midfielder Sam Saunders also unlikely to play a part at Meadow Lane.