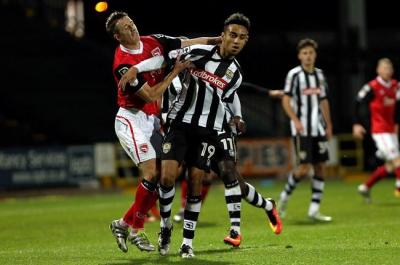 Notts County and Morecambe have met 11 times in their history, with the first ever clash taking place 10 years ago, in September 2007.

On that day, it ended as a 1-1 draw, Michael Twiss putting the visitors ahead at Meadow Lane in the first half, before the late Richard Butcher equalised in the 87th minute.

The Shrimpers are ahead in the head-to-head, with Notts having lost to them five times, beaten them twice, and drawn thrice.

The Magpies ended a run of four League Two matches without a win against Morecambe when the sides met on September 9, claiming a 2-0 victory - their first clean sheet against the Shrimps since December 2008.

This fixture has yielded a scoreline of 4-1 three times already - once in our favour and twice in Morecambe's.

The fixture on 19 September 2009 was former Arsenal and England legend Sol Campbell's only game in a Magpies shirt.

Meanwhile the rematch later in the season, on 17 April 2010, is when Notts mathematically secured promotion to League One.

Notts County have lost each of their last three Boxing Day fixtures in the EFL, including the last time they were on their travels in 2013 (2-1 at Port Vale).

Meanwhile Morecambe have only won two of their last six Boxing Day fixtures (L4), failing to score more than once in any of those games.

Football in the town dates back to the turn of the 20th century; however, it was not until 7 May 1920 that Morecambe FC was formed. The club then took its place in the Lancashire Combination League for the 1920–21 season.

The fourteen years from 1960 could be said to be Morecambe's golden era. This included an FA Cup third round appearance in 1961–62, a 1–0 defeat to Weymouth; a Lancashire Senior Cup Final victory in 1968, a 2–1 win over Burnley; and an FA Trophy success at Wembley in 1974, a 2–1 win over Dartford in the final.

Morecambe, a non-league side for most of their history, were promoted to the Football League for the first time in 2007 after winning the Conference Playoff Final, beating Exeter City 2–1 at Wembley in front of over 40,000 fans.

Morecambe was a thriving seaside resort in the mid-20th century. While the resort of Blackpool attracted holiday-makers predominantly from the Lancashire mill towns, Morecambe had more visitors from Yorkshire, due to its railway connection, and Scotland.

Between 1956 and 1989 Morecambe was the home of the Miss Great Britain beauty contest.

Notts will assess the fitness of Jonathan Forte and Shola Ameobi before making the trip to Lancashire.

Both strikers are nursing knocks following Saturday's 3-3 home draw with Cambridge United, with Forte hurting his hip while scoring the Magpies' equalising goal in stoppage time.

Should neither be available on Boxing Day, Lewis Alessandra could return to the starting XI to partner Jon Stead up front - if manager Kevin Nolan opts to play with two strikers.

Left-back Dan Jones will hope to be recalled to the team after impressing as a substitute for half an hour against Shaun Derry's side.

For Morecambe, midfielder Kevin Ellison could be in contention after starting on the bench in the 2-1 defeat by Mansfield after making a recovery from a hamstring injury.

Callum Lang scored against the Stags to notch his second goal in three games and could keep his place in Bentley's starting line-up.

The Shrimps will be without goalkeeper Danijel Nizic after he was called up to the Australia Under-23 squad for the Asian Federation Cup.

Share your thoughts about this preview article on Pride of Nottingham by signing up to the website, visiting the forum and joining in the chat with hundreds of fellow Notts County fans.