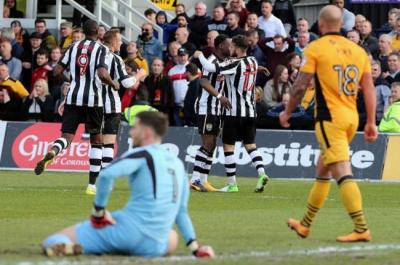 Notts County and Newport County have met a total of 49 times over the years, the first fixture coming in 1930, which the Magpies won 3-2.

The head-to-head record is skewed in the Magpies’ favour, with 26 wins, 9 draws and 14 defeats.

Our last meeting was earlier this season, a 3-0 hammering of the Exiles at Meadow Lane.

Of particular note is the penultimate meeting, in May 2017, the last game of last season, and Newport won 2-1 at Rodney Parade to avoid the drop to the National League.

Notts have only failed to score once in their last 14 meetings with the Exiles in all competitions (W8 D2 L4), netting 30 goals in those matches.

Newport have lost three league games on the bounce, scoring once while conceding 10. They haven't lost four in a row in League Two since January 2017 (eight games).

Notts County have only won one of their last 10 League Two games on the road (D5 L4), failing to keep a single clean sheet during that spell.

Jorge Grant has been directly involved in four goals in just two league appearances against Newport County for Notts County (three goals, one assist), more than he has against any other side for the Magpies.

Newport, originally nicknamed "The Ironsides" due to Newport being home to Lysaght's Orb Works steel works, started out in the Southern League in 1912 at Somerton Park.

The official name of the club was The Newport & Monmouth County Association Football Club, although the shorter Newport County was soon adopted.

The club were reformed in 1919 and were first elected to the Football League in 1920.

Newport were Welsh Cup winners in 1980 and subsequently reached the quarter-finals of the UEFA Cup Winner's Cup in 1981.

The club was relegated from the Football League in 1988 and went out of business in February 1989, but reformed shortly afterwards and entered the English football league system at a much lower level.

In 2013 the club then won promotion back to the Football League for the first time since 1988.

In the 1970s and 1980s comedian Frank Carson was appointed as a Director and Vice President in order to raise the profile of the club.

Newport-based rappers Goldie Lookin' Chain are also supporters of the club and were the team's shirt sponsors for the 2004–05 season FAW Premier Cup matches.

Newport defender - and former Notts player - Scot Bennett will be out after suffering a hamstring injury and won't be back for four to eight weeks.

Mark O'Brien is set to return as Exiles boss Michael Flynn ponders switching to three at the back following Tuesday's 5-0 thrashing at Mansfield Town.

Veteran striker Paul Hayes is fit again after a groin problem, while Josh Sheehan and Emmanuel Osadebe could bolster the midfield.

Notts manager Kevin Nolan must decide whether to restore 17-goal top scorer Jorge Grant to the starting line-up after he looked jaded over the last few weeks.

Alan Smith should return to the squad after being on antibiotics, while Shaun Brisley missed out in midweek through illness and might struggle to regain his place as Brighton loanee Ben Hall did well on his debut.

Share your thoughts about this Stat Attack on Pride of Nottingham by signing up to the website, visiting the forum and joining in the chat with hundreds of fellow Notts County fans.