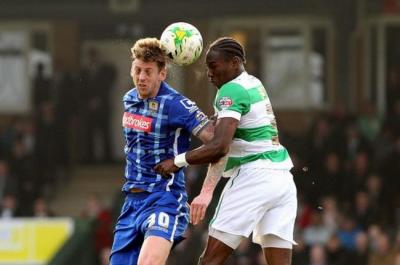 Notts County and Yeovil Town have met 16 times over the years.

The first game took place at Meadow Lane on 4 November 1961, with the Magpies beating their opponents 4-2 in the FA Cup.

That was the only meeting of the two pre-21st century - the 15 meetings following that game all took place between 2004 and this year.

The last meeting came on 21 November last year, a 1-1 draw at Huish Park.

Yeovil have the upper edge in the head-to-head with seven wins, five defeats and four draws against Notts.

Notts have won just one of their last nine league games against Yeovil, and are winless their last four matches against the Glovers/

Yeovil have lost just one of their last four league trips to face Notts, despite failing to score in each of their last two visits to Meadow Lane.

The Magpies have won back-to-back league games for the first time since they won six games in a row ending in September.

Jonathan Forte has scored three goals in his last two league games, as many as he managed in his previous 23 combined.

Yeovil Football Club was founded in 1890, and shared their ground with the local rugby club for many years.

The Somerset outfit have spent most of their existence in the lower leagues, though they briefly made a name for themselves in the 1948-49 season when they beat Sunderland 2-1 in the FA Cup fourth round.

In the 1980s, Yeovil were founder members of the Football Conference, where they remained for the next two decades, save for a few relegations to the Isthmian League which usually resulted in an instant return to the above tier.

Yeovil Town earned promotion to the Football League in the 2002-03 season, by winning the Football Conference by a record 17 points margin, accumulating 95 points and scoring 100 goals, remaining unbeaten at Huish Park.

In their second ever season in the Football League, the Glovers went one better by achieving promotion to the third tier as champions of League Two.

Then, in the following years even reached the League One playoffs, beating Nottingham Forest in the semi-finals in 2006-07 before losing to Blackpool in the final at Wembley.

Six years later, however, Yeovil achieved what had been deemed unthinkable a decade earlier - they reached the second tier of English football after beating Brentford in the 2013 League One play-off final.

Their stay in the Championship was brief, however, and they went on to suffer back-to-back relegations, leaving them in the bottom tier of the Football League where they still ply their trade.

Jon Stead could return to the Notts starting line-up, having made his return from injury at Colchester United last Saturday as a substitute.

That game came too soon for Terry Hawkridge but the winger could feature this weekend.

Yeovil are still without former Notts man Francois Zoko, who has one game left to serve on his suspension, while it may be too early for Sam Surridge.

Share your thoughts about this preview piece on Pride of Nottingham by signing up to the website, visiting the forum and joining in the chat with hundreds of fellow Notts County fans.