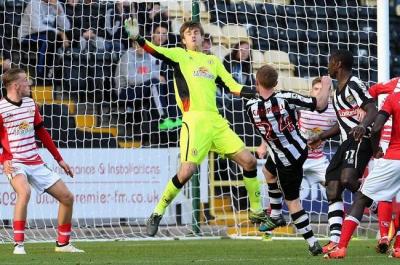 Notts have met Crewe 46 times over the years.

Notts have lost only one of their last fifteen games against Crewe, winning ten and drawing four.

Despite their good record against Crewe, they haven’t won at Gresty Road since 2014.

Notts have lost only 1 of their last 5 games and have won their last two away games, scoring three in both games.

Crewe have won only 1 of their last 4 home games but they overall, they are in the top 7 for their home form this season.

Notts will be without Elliott Hewitt for the rest of the season due to a knee injury.

Kane Hemmings had fluid drained from his leg this week and will be available to play. The former Oxford striker has 13 goals this season.

Emergency loan signing Alex Palmer will likely take his place in goal for Notts as Ryan Schofield is suspended and Ross Fitzsimons is ill.

Crewe captain George Ray may return after serving a suspension, whilst wingers Charlie Kirk and Callum Ainley will look to make their way back into the starting eleven after being benched for last week's derby game against Port Vale.