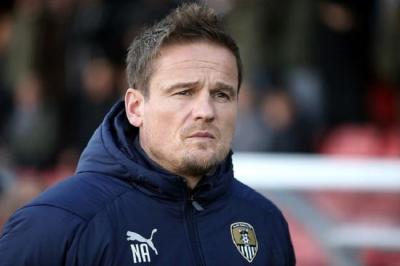 Notts have met Bury 118 times in their history.

Bury won the reverse fixture 4-0 at Gigg Lane in a match they dominated from start to finish.

It was a result that stopped Notts’ five game unbeaten run. It was this result that started the fall back down the table and eventually led to the sacking of Harry Kewell.

Notts have won 1 of their last 12 league games (a sequence which started with the 4-0 loss at Bury earlier in the season).

One positive (a rare thing at the moment) is that Notts have scored in both home games Neal Ardley has took charge of.

Whilst their home form has been brilliant with four successive wins at Gigg Lane, Bury have hit a bad patch away from home in which they are winless in three (2-2 vs Cambridge, 4-2 vs Oldham and 2-1 vs Mansfield).

Danger man Danny Mayor has completed the most successful dribbles this season in League Two with 128.

Notts vs Bury (head to head stats and where they rank)

Enzio Boldewijn and Lewis Alessandra will not be returning until past the new year.

Elliott Hewitt was subbed off with an injury early into Wednesday’s game with Macclesfield and may miss out here.

Keston Davies will be suspended after his late red card against the Silkmen.

Ben Hall is out long term and will probably not make another appearance for Notts this season.

Bury made changes for their game against Mansfield and manager Ryan Lowe may want to change the team again.

Top scorer Nicky Maynard and top assists leader in the league, Nicky Adams were two players who may return to the starting XI.