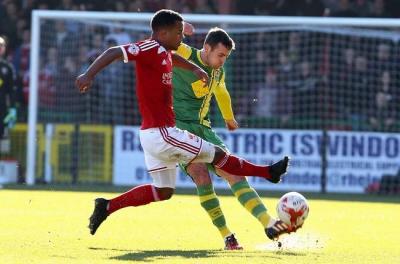 Notts County have met Swindon Town on 65 occasions, the first time being in the FA Cup over a century ago.

On that day in January 1911, the Robins beat the Magpies 2-0 at the County Ground.

Notts have won four of their last five home league matches against Swindon, losing the other.

The home side has won five of the last six league meetings between Notts County and Swindon.

Swindon have failed to score in each of their last three league games (D1 L2), the longest current run in the competition.

Michael Doughty have been directly involved in seven of Swindon's 17 league goals this season (41%) scoring five times and assisting a further two.

The club was founded in 1879 by Reverend William Baker Pitt.

Whilst curate of Christ Church, the high church of Swindon, Pitt formed Swindon Association Football Club to provide recreation for young men in his parish.

This, the highest-scoring Charity Shield game to date, was played on 25 September 1911 at Stamford Bridge with Manchester United winning 8–4!

Some of the proceeds of this game were later donated to the survivors of the Titanic.

During World War II, The War Department – the government body responsible for the supply of equipment to the armed forces in the UK – took over the County Ground in 1940.

For a while, prisoners of war were housed in huts placed on the pitch. For this, the club received compensation of £4,570 at war’s end.

Swindon Town were the first League club to use floodlights, having had them installed in 1951.

The County Ground is also the only football stadium in the world with a Rolex watch acting as its timekeeper –the clock on the Stratton Bank stand featuring its name was erected to celebrate promotion in 1963.

Swindon have spent one season in the top flight, in 1992-93, during which Glenn Hoddle managed them.

Sadly, they didn't do too well, being relegated at the end of the season after conceding 100 goals.

The most notable silverware in the Robins’ possession is undoubtedly the League Cup, won in 1969 after beating Arsenal in the final at Wembley.

Royle Family and Two Pints Of Lager actor Ralf Little was rumoured to be on trial at Swindon back in 2002, though the funnyman later claimed that he was just training with the squad.

Jazz singer Jamie Cullum is also a fan of the Robins.

Notts County will have defender Jamie Turley available for the Swindon game following a successful appeal against his red card.

The centre-back was sent off during the second half of the midweek defeat at MK Dons but on Thursday the FA upheld a claim of wrongful dismissal.

Midfielder Rob Milsom has served a three-match ban and will be available again to manager Harry Kewell.

Centre-half Richard Duffy has been sidelined by a hamstring injury and even though he's back in training, he may need some more time to get back to full fitness.

On-loan Brighton defender Ben Hall is back at his parent club to undergo treatment on a groin problem.

Swindon will check on the fitness of midfielder Michael Doughty ahead of the trip to Meadow Lane.

Doughty needed stitches in an ankle wound picked up during the home defeat by Cambridge on Tuesday night, so continues to be assessed.

James Dunne could come into the team should Doughty not be passed fit, with midfielder Jermaine McGlashan and forward Kaiyne Woolery both pressing for a start.