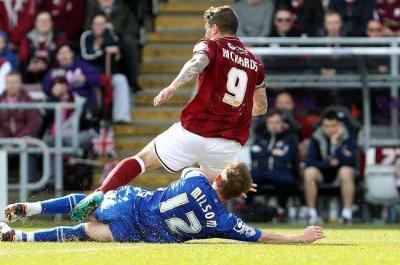 Notts County have met Northampton Town 55 times in their history.

The last time Notts met The Cobblers was in the 2015-16 season with Town winning 2-1 at Meadow Lane and the reverse fixture finishing 2-2 at Sixfields with Thierry Audel and Jon Stead getting the goals for a Notts team under the stewardship of Mark Cooper.

Notts did the double over Northampton in the title winning 2009-10 season, winning 5-2 at Meadow Lane and 1-0 at Sixfields.

Northampton have only won once this season with the sole win coming away at Colchester. Matt Crooks and Billy Waters were the goalscorers in a 2-1 win.

They are on a run of three winless games and haven’t won at home this season.

Notts still haven’t won this season but there were some positives to take out of the home draw with Stevenage.

The attack looks like it’s getting better and Enzio Boldewijn and Kane Hemmings are improving.

They moved to their current home at Sixfields in the 1994-95 season.

Northampton were in the Southern League and Midland League before being elected to the Football League in 1920.

Northampton Town will be without suspended defender Aaron Pierre, who was sent off just before the hour mark of last weekend's 2-0 loss to Port Vale and must serve a one-match ban.

Striker Junior Morais is definitely sidelined while Daniel Powell is also set to miss out - both have hamstring issues - and Shaun McWilliams is a doubt with a foot injury.

The Cobblers have only won one match so far this season and manager Dean Austin could make changes after being frustrated by their performance against Vale.

New signings Jamie Turley and Cedric Evina both made their debuts against Stevenage but the former only lasted 45 minutes after appearing to hurt his ribs.

If he is not fit, Matt Tootle is likely to come into the starting line-up having replaced Turley in his own return from injury.

Midfielder Andy Kellett could come back into contention following injury but Dan Jones serves the last game of his three-match ban while Richard Duffy and Ben Hall are still expected to be unavailable.