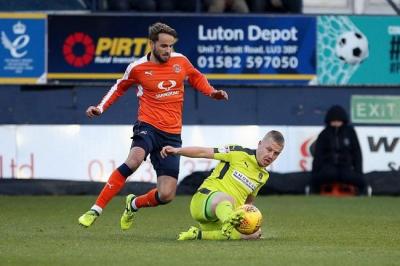 Notts County and Luton Town have faced off 71 times in their history.

The first meeting came in January 1912 when the Magpies secured a 4-2 away win in the FA Cup.

The last one was in December, a 1-1 draw at Kenilworth Road.

Luton dominate the head-to-head with 35 wins over Notts, 21 draws and 15 defeats.

The Magpies have lost only once in their last five home league meetings with Luton, a 2-0 reverse in March 2009.

The Hatters are unbeaten in the last three league clashes between these two sides since losing both meetings in the 2015-16 campaign.

A win for Notts will see the Magpies finish on 79 points, their highest points tally since winning the League Two title with 93 points back in 2009-10.

Luton have won nine league games by three or more goals this season, more than any other side in League Two.

Danny Hylton has been directly involved in seven goals in his last seven games for the Hatters in League Two (six goals, one assist).

Luton Town Football Club was formed on 11 April 1885, the product of a merger of the two leading local teams, Luton Town Wanderers and Excelsior.

The club was the first in southern England to turn professional, making payments to players as early as 1890 and turning fully professional a year later.

Luton reached the First Division in 1955–56 and contested a major final for the first time when playing Nottingham Forest in the 1959 FA Cup Final.

The team was then relegated from the top division in 1959–60, and demoted twice more in the following five years, playing in the Fourth Division from the 1965–66 season.

Luton Town's most recent successful period began in 1981–82, when the club won the Second Division and gained promotion to the First.

Luton defeated Arsenal 3–2 in the 1988 Football League Cup Final and remained in the First Division until relegation at the end of the 1991–92 season.

Between 2007 and 2009, financial difficulties caused the club to fall from the second tier of English football to the fifth in successive seasons.

The last of these relegations came during the 2008–09 season, when 30 points were docked from Luton's tally for various financial irregularities.

Luton then spent five seasons in non-League football before winning the Conference Premier in 2013–14, securing promotion back into the Football League.

The club's nickname, "the Hatters", reflects Luton's historical connection with the hat making trade, which has been prominent there since the 1600s.

The nickname was originally a variant on the now rarely seen straw-plaiters. Supporters of the club are also called Hatters.

Luton is associated with two very different colour schemes - white and black (first permanently adopted in 1920), and orange, navy and white (first used in 1973, and worn by the team as of the 2015–16 season).

Notts go into their final game of the regular season guaranteed a top-seven finish as they hope to join the Hatters in League One next season, and Kevin Nolan is mulling over which players to use for the game.

Leading scorer Jorge Grant is fit again after an ankle injury but might only be on the bench again on Saturday, as he was for the defeat at Grimsby last weekend, if Nolan opts to rest his stars.

Defender Matt Tootle, meanwhile, should have recovered from illness.

Promoted Luton could have Scott Cuthbert back in their starting line-up at Meadow Lane.

Hatters boss Nathan Jones has picked an unchanged side for the last four games but might decide to freshen up his team for the final match of the campaign.

Cuthbert has recovered from a groin injury and made his return to action as a late substitute against Forest Green last weekend.

Luke Gambin and James Justin might also come into Jones' thoughts but Lawson D'Ath (knee) remains a serious doubt and Luke Berry (fractured leg and dislocated ankle) is out.