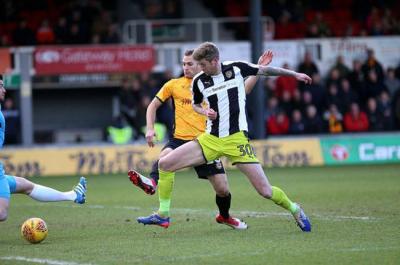 Notts have met Newport 50 times including both the old club and new club.

Notts first met The Exiles on October 18th, 1930 in which they came away from Somerton Park with a 3-2 win.

Last season, Notts took four points from Newport with them dominating The Exiles at Meadow Lane 3-0, with a 0-0 draw at Rodney Parade in the return fixture.

The six meetings between the two, since Notts came back into League Two, have seen Notts win three, Newport win two and there has been one draw.

Notts are still yet to pick up their first win and look very fragile.

Newport were founded in 1912 and the original club, dissolved in 1989 and were reformed in the same year, where they started in the Hellenic League.

They were Welsh Cup winners in 1980 and this allowed them to qualify for the European Cup Winners Cup, where they got to the quarter-finals before losing 3-2 on aggregate over two legs to German side Carl Zeiss Jena.

The Exiles’ biggest victory is a 10-0 win over Merthyr Town on April 10th 1930 in the Third Division South.
Their biggest defeat is a 13-0 loss to Newcastle United on October 5 1946 in the Second Division.

Their mascot is Spytty the Dog.

They have played at numerous stadiums during their history: Somerton Park (1912-1989), Newport Stadium (1994-2012), Rodney Parade (2012-present). They have also had spells in Gloucester and Moreton-in-Marsh.

Seasons in each tier of English Football.

Andrew Crofts could be in line for a return for Newport whilst centre-back Mark O’Brien has recovered from an injury in pre-season. Robbie Willmott and David Pipe are injury doubts.

Notts are without Matt Tootle (toe) and Ben Hall (groin) who are set to miss the game on Tuesday. Christian Oxlade-Chamberlain recently returned to training.