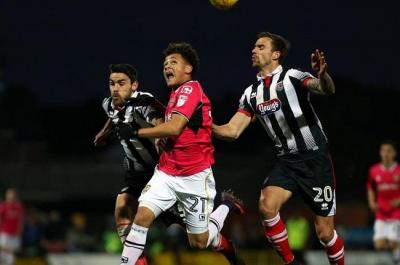 Notts County and Grimsby Town have met a total of 81 times over the years.

The Magpies have 27 wins, while the Mariners have 33, and 21 games have been drawn.

Notts have however failed to beat Grimsby in their last four attempts, with three draws and one defeat.

The last game was at Meadow Lane in December, a goalless draw.

Grimsby are now unbeaten in four league games on home soil despite winning just one of those games.

Grimsby Town FC was formed in 1878 after a meeting held at the Wellington Arms public house in Freeman Street, Grimsby.

The club was originally called Grimsby Pelham, this being the family name of the Earl of Yarborough, a significant landowner in the area.

In 1880 the club purchased land at Clee Park which was to become their ground until 1889 when they relocated to Abbey Park, before moving again in 1899 to their present home, Blundell Park.

The club is the most successful of the three professional league clubs in historic Lincolnshire, being the only one to play top-flight football.

It is also the only club of the three to reach an FA Cup semi-final (doing so on two occasions) and is the only one to succeed in two finals at the old Wembley Stadium.

It has also spent more time in the English game's first and second tiers than any other club from Lincolnshire.

Notable managers include Bill Shankly, who went on to guide Liverpool to three League titles, two FA Cups and a UEFA Cup triumph and Lawrie McMenemy who, after securing promotion to the then third division in 1972, moved to Southampton where he won the FA Cup in 1976.

Alan Buckley is the club's most successful manager; he had three spells as team manager between 1988 and 2008, guiding the club to three promotions and two appearances at Wembley Stadium during the 1997–98 season winning both the Football League Trophy and the Football League Second Division playoff Final.

In 2008 Buckley took Grimsby to the capital again, but lost out to MK Dons in the final of the Football League Trophy.

The Mariners had also reached the Football League Two Play-Off final in 2006 at Cardiff's Millennium Stadium, but lost the match 1–0 to Cheltenham Town.

Later trips to the Wembley in 2013 and 2016 saw them defeated in the FA Trophy final by Wrexham and FC Halifax Town respectively.

Grimsby managed to reach the Conference play-off final in both 2015 and 2016, after losing to Bristol Rovers they defeated Forest Green Rovers to earn promotion back to the Football League.

Initial relegation from back in 2010 made them the fourth club to compete in all top five divisions of English football (after Carlisle United, Oxford United, and Luton Town).

Notts are monitoring the fitness of top-scorer Jorge Grant, who missed the 4-1 win over Yeovil Town with an ankle injury, while Matt Tootle should be back after illness.

Ben Davies and Simeon Jackson are in contention should changes be required, but defender Zak Mills is out with a hernia.

Siriki Dembele caught the eye for the reserves in midweek and could challenge Harry Cardwell in attack.