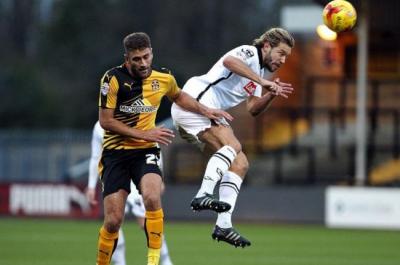 Notts County and Cambridge United have met 27 times in their history.

The first meeting came on Boxing Day 1970 at Meadow Lane, with the Magpies earning a 4-1 win.

Notts hold the advantage in the head to head, with 11 wins, 7 draws and 9 defeats against the U’s.

Recent form is not good, however - we've lost our last four meetings against Cambridge.

The last meeting was on 2 January this year at the Abbey Stadium, and we lost 4-0.

Notts County are on a run of five League Two matches without a victory against Cambridge (D1 L4) having previously won three on the bounce in all competitions.

Cambridge have won back-to-back away Football League matches against Cambridge for just the second time; they have never done so on three consecutive trips.

43 points from 22 games is Notts County's best return in a league season since 1987/88 (3rd tier) and nearly twice the tally of points they had won at this stage last season (22).

Cambridge have scored just seven goals in their last 12 League Two matches, failing to score in seven of these games.

The club was founded in 1912 as Abbey United before taking the name Cambridge United in 1951.

It first competed in the Football League in 1970 and stayed there until relegation in 2005, nine seasons in the Conference following until climbing back out of non-league.

Cambridge have had two spells in the league's second tier, and reached the quarter-finals of the FA Cup twice and Football League Cup once during the early 1990s, the club's most successful era to date.

United's highest ever finishing place in the Football League is fifth in the Second Division during the 1991–92 season, competing in a season-ending four team playoff for the final promotion slot to the Premier League's inaugural season.

The club is based at the Abbey Stadium on Newmarket Road, approximately 1.86 miles east of Cambridge city centre. The stadium has a capacity of 8,127, made up of terracing and seated areas.

During their days in Division Two, with John Beck at the helm in the 1980's, the club earned a reputation for bizarre training methods and "dirty tricks" to make their opponents feel ill at ease.

These included freezing cold showers for his own players, dirty changing rooms and deflated kick-about balls for the opposition and long grass in the corners of the pitch to slow the long balls into those areas, allowing the U’s forwards to reach them.

Beck carried on his dirty tricks even after leaving to take charge of Preston North End – taking nine of the Cambridge United players with him.

He was not the only famous manager at the club, with Ron Atkinson taking the club from Fourth to Second division and Ex-England and Derby County centre-half Roy McFarland also sitting in the hot seat.

Before their entry into the League, a local animal sanctuary had an escapee and it was found grazing on the pitch at the Abbey Stadium. This lead to the moose connection with the club, and in the club shop you can buy a range of moose souvenirs to show your allegiance to the U’s.

And connecting the two clubs – none other than former Notts manager Shaun Derry, now a the helm of the U’s.

Adam Collin is back in training and rebuilding match fitness after suffering a knee injury in October, but Saturday's match comes too soon for the goalkeeper.

Jonathan Forte, Lewis Alessandra and Rob Milsom all stand by in hope of recalls.

Cambridge boss Shaun Derry goes to his former club with his future on the line and he could make changes.

Last Saturday's last-gasp loss to Newport means United have just one win in eight games, while they are the lowest scoring side in the division and Derry has only been assured of his position for the Christmas period.

Ade Azeez played 90 minutes on his first start following three months out with a calf injury.

Derry named just four substitutes against Newport and could be short of options, with Gary Deegan and David Amoo expected to miss out again.