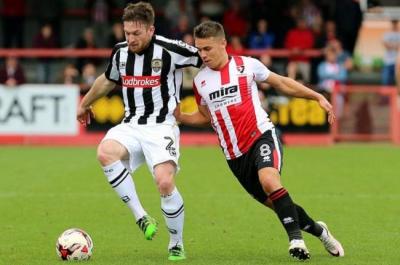 Notts County and Cheltenham Town have met just 10 times over the years.

The first meeting came in Division 2 on 28 September 2002 at Whaddon Road, and Notts comfortably won 4-1.

Notts are ahead in the head-to-head with 6 wins, 2 draws and 2 losses.

The Magpies have won each of their last three league games against Cheltenham, scoring 10 whilst conceding three.

The Robins have only beaten Notts County once at Meadow Lane in the Football League, a 3-2 win in November 2005.

Cheltenham Town were founded in 1887 by Albert Close White, a local teacher.

However, the town has prior football history - in 1849, the first use of three official referees in a match, two in field and one in tribune, was recorded in Cheltenham.

Promoted to The Football League as Conference Premier champions in 1999, Cheltenham have played as high as League One, the third tier of English football, spending a total of four seasons there.

The last piece of silverware won by the club was the National League title in 2015–2016.

Its league status was lost with relegation in 2015, only for the team to return, as runaway champions, a year later.

Elliott Hewitt is suspended after collecting his fifth booking of the season in the 1-1 draw at Stevenage, where he also scored the Magpies' equaliser.

Adam Collin remains sidelined for at least another five weeks after suffering a knee injury against Barnet last month so Ross Fitzsimons is expected to continue deputising in goal.

Bristol City loanee Joe Morrell will return to the Cheltenham starting line-up after missing the last two matches due to international duty.

Morrell was selected for the Wales Under-21s squad but missed the Bosnia and Herzegovina game with illness and was an unused substitute for the Romania clash four days later.

Midfielder Kevin Dawson serves the second of his three-match suspension for his red card in the FA Cup first round defeat against Maidstone earlier this month.

Jordan Cranston has been ruled out for the rest of the season after tearing his hamstring in the 2-2 home draw with Luton and will undergo surgery next week.