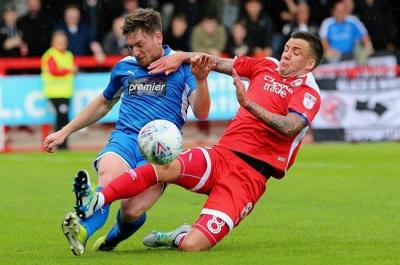 Notts County have played Crawley Town 11 times in their history.

The first fixture between the two was on 10 November 2012 at Meadow Lane, a League One meeting which finished 1-1.

Meanwhile the return fixture, played away on 9 March 2013, ended as a goalless draw.

The record stands at seven Notts wins, two Crawley wins, and two draws - all games took place either in League One or League Two.

Notts have won their last five games in a row agains Crawley, and seven of the last eight.

Notts have only won two of their last eight games, drawing four and losing two.

Despite still sitting second in League Two, the chasing pack are now just a few points behind.

Accrington Stanley and Exeter City now have the possibility to leapfrog the Magpies with their game in hand.

Crawley, meanwhile, have won six of their last 10, allaying their early-season relegation fears.

Harry Kewell's side went into last weekend's game on the back of a three-match winning run but lost 2-1 at Newport County on Friday night.

Crawley Town have been a non-league side for the majority of their history.

In the 2010s, when Notts were struggling to survive in the old Second Division, Crawley had just been promoted from the Southern Football League.

Crawley have won plenty of silverware in their history, though the majority of it is amateur-based.

This changed when they won the Conference National title in 2011 and the League Two title just a year later.

2010-11 was a record-breaking season not just for Crawley, but also for the Conference.

The West Sussex club broke the points total in one season (105) and tie with other teams for most wins in one season (31), fewest defeats (3), and highest goal difference (+63).

Because of this season, alongside the funds they had to buy players and an unlikeable manager (Steve Evans), they were known as “the Manchester United of non-league football”.

The town of Crawley is known for being close - just three miles in fact - to Gatwick Airport, the world's busiest single-runway international airport.

Famous people who have links to Crawley include Australian footballer Kevin Muscat (born in Crawley), Gareth Southgate (attended the town's Hazelwick School), English rock band The Cure (formed in Crawley, several of its members attended St Wilfrid's RC School) and Gorillaz lead singer 2D (a fictional character, his back story claims he grew up in the town).

Shaun Brisley was taken off against Exeter City and Kevin Nolan says the defender has a haematoma and will not be risked against Crawley.

Richard Duffy was back in training on Monday, while Matt Tootle sat it out, but both players could potentially play a role in Tuesday night's game.