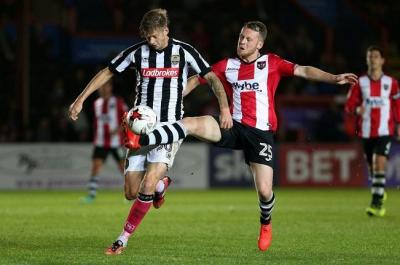 Notts County and Exeter City have met a total of 45 times over their history.

The first meeting came at St James’ Park in Division Three (South) on 1 November 1930, and it finished as a 3-3 draw.

The Magpies have an excellent record against the Grecians; from 45 competitive encounters, Notts have won 18 and drawn 19.

Our last meeting was on September 26 at St James' Park, where Notts outlined their promotion credentials with a 3-0 win over their fellow high-flyers.

Notts are unbeaten in their last three League Two matches against the Grecians (W2 D1), keeping clean sheets in two of those matches.

However, Exeter have avoided defeat in each of their last two visits to Meadow Lane in League Two (W1 D1), including a 4-1 away win in this exact fixture in the 2015/16 campaign.

Along with Brentford, The Magpies are currently enjoying the longest home unbeaten run in the 2017/18 campaign only of all the sides in the English Football League (13 games - W10 D3), last losing at home in the league back in April 2017.

Exeter on the other hand, have lost each of their last five league games on the road, failing to score more than one goal in any of those matches. They last lost more away games on the bounce when they were defeated in nine such consecutive games between February and April 2012.

Jorge Grant has scored three goals in his two league appearances for Notts County against Exeter despite starting neither of those games, averaging a goal every 22 minutes on the field against the Grecians.

Exeter was formed in 1901 as St. Sidwell's United and played in the Southern League from 1908 until 1920, when that league's top division was absorbed into The Football League as its new Division Three.

The club was the first ever team to play the Brazilian national team in 1914, a match which was commemorated in a 2014 friendly game against Fluminense.

City took 60 years to achieve their first ever promotion, finishing fourth in Division Four in the 1963–64 season.

Singer Joss Stone signed up as a member of the Supporters' Trust, being introduced to fans on the pitch as a new member during a League Cup match against Liverpool.

In 2002 pop singer Michael Jackson was made honorary director of Exeter City. He visited St James Park with celebrity friend Uri Geller, who was also a director.

The crew of the HMS Defender also adopted Exeter City as their home team and use their strip if playing games whilst on tour.

Shola Ameobi returned from a four-match injury absence as a second-half substitute in last weekend's draw at Lincoln City and is expected to feature against Exeter.

Should Magpies manager Kevin Nolan opt to restore Ameobi to his starting line up, Lewis Alessandra could be the player to make way.

Nolan was this week boosted by the news that Nottingham Forest will let Jorge Grant remain on loan at Meadow Lane for the remainder of the season.

Exeter captain Jordan Moore-Taylor is rated a 50/50 chance to be fit in time for Saturday's game - the 23-year-old has not played since December 30 due to injury.

Fellow defenders Troy Brown and Luke Croll, who have been absent even longer than Moore-Taylor are also back in training but are not yet ready for first team action.

Midfielder Hiram Boateng will be hoping for a place in the starting line-up after coming off the bench against Coventry last week.

Share your thoughts about this Stat Attack preview on Pride of Nottingham by signing up to the website, visiting the forum and joining in the chat with hundreds of fellow Notts County fans.