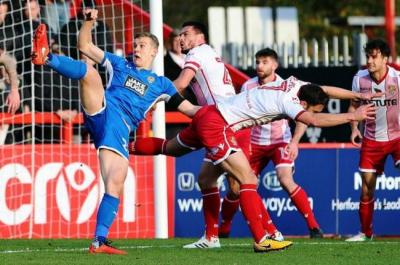 Notts County and Stevenage have only ever met 12 times in competitive fixtures.

The first meeting was on 17 September 2011 at Broadhall Way (known as the Lamex Stadium) - the result on that day was 2-0 to the Magpies.

Our head-to-head record is five wins for Notts, five for Stevenage, and two draws.

The Magpies have won one of their last four home league games against Stevenage, drawing one and losing two.

Stevenage, meanwhile, have won one of their last six league games against Notts County.

Stevenage in their current form have only been in existence since 1976, but there have been numerous incarnations of the club that stretch back over a century.

A club called Stevenage FC was formed in 1894, but they soon adopted the name Stevenage Town.

In 1951 the club were founder members of the Delphian League. In 1956 they merged with Stevenage Rangers to form Stevenage FC, before reverting to Stevenage Town four years later.

Stevenage Borough, formed shortly after Athletic's demise, managed to prosper and work their way up the leagues until finally reaching the Football League in 2010, at which point they took the whole thing full circle by dropping the Borough from their name and becoming Stevenage FC.

Despite their relatively short history, Stevenage have won a number of trophies and competitions, including two FA Trophy cups in 2007 and 2009.

Broadhall Way holds 6,722 people, 3,142 of which can be seated. To put it into perspective, three full houses at Stevenage could fit into the Meadow Lane stands with 45 seats to spare.

The highest attendance recorded at the stadium was 8,040 for a match against Newcastle United in the FA Cup fourth round on 25 January 1998.

On that day a temporary stand was erected behind the away end to increase the stadium capacity to 8,100, enough to satisfy FA requirements.

Two films were set in and around Stevenage: "Here We Go Round the Mulberry Bush" and "Boston Kickout".

"Spy Game", meanwhile, was partly filmed in Stevenage but set in Washington DC.

A number of famous sporting figures were born in Stevenage, the most notable of which are Lewis Hamilton, Jack Wilshere, Ashley Young, Ian Poulter, Kevin Phillips and Jason Shackell.

Kevin Nolan's got pretty much a clean bill of health, save for long-term absentee Michael O'Connor who is nonetheless back in training.

The Magpies are looking to bounce back from the midweek defeat to Cambridge United and Nolan wants more players to chip in with goals to aid top scorer Jorge Grant.

Grant has scored 17 times in 43 games since joining on loan from city rivals Nottingham Forest, but has found the net just once in 2018.

Stevenage boss Darren Sarll will hope to have Matt Godden and Ron Henry available again for the trip to Meadow Lane.

Both players missed last week's 4-1 win over Yeovil Town but will be given as long as possible to prove their fitness.

Sarll has been boosted by the return to training of Chris Whelpdale and Ben Sheaf following lengthy injury lay-offs.

Whelpdale has not played since the end of December and Sheaf since earlier the same month, but both are targeting a place in the squad.