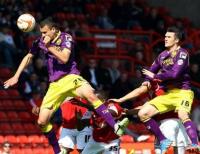 Notts County’s survival hopes were seriously dented after losing 2-1 away at Bristol City this afternoon, thanks to a brace from Sam Baldock. The Magpies were dominant throughout the game but conspired to concede twice against the run of play, despite Haydn Hollis’s response on the half-hour mark, to leave Ashton Gate empty-handed.

Following Hollis’s one-game ban, the defender returned to the starting XI to partner Hayden Mullins at the heart of the back four. Alan Sheehan returned to left-hand side of defence, while Gareth Roberts dropped to the bench.

The away side, one place above the relegation zone and out of the bottom four on goal difference, were quickest out of the starting blocks and exerted the most pressure in the early stages, even if the best chance fell to Bristol, with Baldock beating Hollis and threading the ball through to Martin Paterson, who fired over from 10 yards.

Notts responded by earning themselves four corners in quick succession, but against the run of play, City took the lead in the 13th minute when Paterson picked out Baldock at the far post, the 25-year-old opening up his body to side-foot home from close-range and net his 24th goal of the season.

The away side responded in positive fashion, Jack Grealish arriving just a little too late to finish off a Ronan Murray cross, while Sheehan produced two long-range efforts and forced a block from Jay Emmanuel-Thomas and a save from Simon Moore.

Eventually, the breakthrough for the Magpies came just before the half-hour mark, when a Sheehan corner was met by a powerful close-range Hollis header to make the scoreline 1-1.

City went close to regaining the lead shortly before half time, Marlon Pack picking out Baldock with a brilliant cross-field pass. The team’s leading scorer surged past Sheehan, only to be foiled by Bartosz Bialkowski, who rushed from his line to make a crucial save with his feet.

In the early stages of the second half, County would continue to have the better of the game, with Karleigh Osborne having to be alert to deny Hollis another header on goal from a Sheehan set-piece delivery.

City almost fell behind when keeper Moore fumbled an innocuous shot from Jimmy Spencer, but recovered in the nick of time to push the ball away from the marauding Murray.

County continued to create the more clear-cut openings and Spencer was inches off target with a fiercely struck shot that flew inches over the bar, while Moore had to make a save low to his left to push away an effort from Callum McGregor.

Grealish then went agonisingly close to giving them the lead, curling his shot inches wide of the post from the edge of the penalty area.

Just when it seemed that City would have been lucky to settle for a point, they were gifted a dramatic winning goal against the run of play.

Bialkowski should have dealt with a long ball played straight down the middle of the pitch, but he flapped at it and allowed Baldock to steal in and fire into an empty net from 10 yards out.

The result means that Bristol City are all but safe, while Notts County slip back into the relegation zone in 22nd place and three points from safety.

Monday will be absolutely crucial now. Is the Great Escape still on.