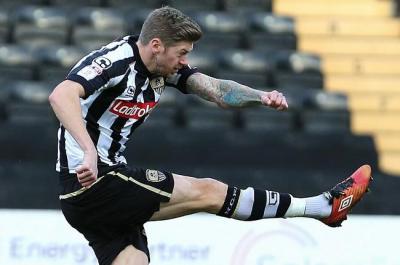 Notts County have claimed their second win in three League Two games after Jon Stead scored a late penalty to secure a 1-0 victory over Port Vale.

The Magpies had lost 1-0 at Swindon Town two days ago but bounced back by beating a Vale side that had notched up wins over Luton Town and Coventry City over the festive period.

At the other end, Anderson volleyed just over the bar from inside the area in the 10th minute, while Ben Whitfield's dangerous cross three minutes later had to be clawed away by Ross Fitzsimons.

Vale came close again on 19 minutes when Danny Pugh's corner pinballed around the Notts area but Whitfield's eventual connection was charged down by Richard Duffy.

There was a controversial moment when Shaun Brisley was brought down on the edge of the area, but the referee awarded neither a free kick nor a penalty.

County then enjoyed a spell of pressure as Stead rifled Matt Tootle's cutback over from range before Jonathan Forte and Ryan Yates saw efforts kept out by keeper Ryan Boot.

Vale finished the half asking questions of the hosts' defence, with Whitfield volleying over and Antony Kay heading off target, but neither side could break the deadlock come the break.

Following the restart, Notts began strongly, Forte firing wide after latching onto a long ball over the top and Lewis Alessandra seeing his volley deflected off target.

The pendulum continued to swing back and forth as Vale enjoyed several chances, with Anderson seeing an effort of his own deflected wide, plus a header sent off target, while Marcus Harness saw two efforts blocked after slaloming into danger.

Grant was the next Notts player to see a penalty appeal waved away after he went down under Harness' challenge in the area.

However, it was third time lucky as Stead was brought down by Harness 86 minutes in and the referee pointed to the spot, the veteran striker stepping up and hammering his penalty into his top-left corner.

Although Vale finished strongly, they could not pull back an equaliser as the final whistle saw Notts claim all three points.