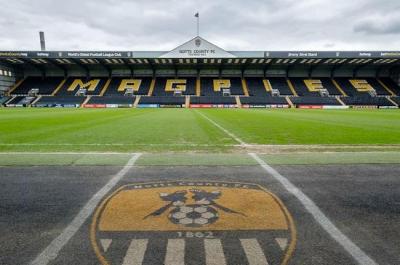 The Magpies' unbeaten league home run came to an end at the weekend as Exeter City won 2-1 and the Red Devils won by the same scoreline in a game which ended in rambunctious circumstances.

Kevin Nolan's side began brightly, forcing five corners in the first ten minutes, and nearly took the lead when Matty Virtue's shot was hacked off the line by Josh Lelan.

Lewis Alessandra then came just as close when Liam Noble's header came off an opposition defender and fell to the winger but his shot on the turn clipped the top of the bar on its way over.

The pendulum soon swung the other way, however, and Crawley enjoyed a bright spell before taking the lead on 25 minutes.

Lelan’s throw on the right was flicked on by Thomas Verheydt towards Jimmy Smith, who made the most of the space at his disposal to volley beyond Ross Fitzsimons and inside the right-hand post.

The first half ended with Notts on the back foot, save for Virtue heading a yard wide in stoppage time from Dan Jones’s cross.

The restart saw the hosts push forward in a bid to chase an equaliser and enjoyed several good chances as Grant volleyed wide of the post before Stead curled wide of the upright.

Eventually the equaliser came when Lelan was adjudged to have handled inside the area for a Notts penalty, which Stead dispatched low to the keeper's right.

Unfortunately, County's hopes of hanging on to a point were dashed in stoppage time when Virtue was shown a second yellow card before Fitzsimons, looking to send a claimed corner upfield, was blocked by Mark Connolly.

The Notts keeper lashed out and kicked the Crawley man, prompting the ref to not only send him off, but to award the visitors a penalty, which Josh Payne slotted home.