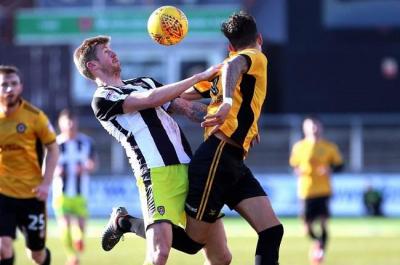 Notts County have lost further ground in the race for the League Two automatic spots after being held to a 0-0 draw at Newport County on Saturday.

The hosts began brightly as Padraig Amond fired over in the first 30 seconds Dan Butler and Robbie Willmott worked their way down the left flank.

At the other end, Jon Stead was on hand to meet a Carl Dickinson delivery from the byline but the veteran's effort at the near post was wide.

Joe Day was then tested on the quarter-hour mark when he pushed away Elliott Hewitt's drive from range as the contest subsequently become more of a war of attrition in midfield.

There would be little goalmouth action until the latter stages of the first half, when Amond blazed over from a difficult angle and Jorge Grant bent a 25-yard free kick wide of the post.

Neither side could find a breakthrough come the end of the opening 45 minutes and no changes were made when the restart came about.

As with the first half, the game was a slow burner as both teams took a while to get back into the game.

On 55 minutes Joss Labadie found the back of the net but the goal was disallowed for an infringement on Adam Collin.

A quarter of an hour later, Notts spurned a great chance when Grant saw an effort blocked before the ball fell for Alessandra to fire goalwards from the edge of the area.

Day managed to parry the effort, only for the ball to then fall into the path of Liam Noble, who fluffed his lines by blazing high and wide.

Four minutes were added on at the end of the match, with Notts finishing brightly by winning a succession of corners, but ultimately the final whistle blew on a stalemate.

Share your thoughts on the game on Pride of Nottingham by signing up to the website, visiting the forum and joining in the chat with hundreds of fellow Notts County fans.