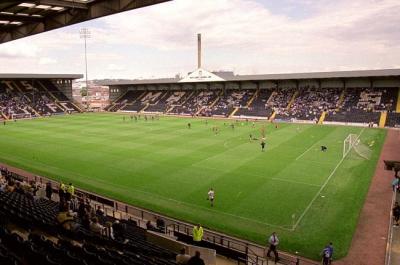 Boss Kevin Nolan fielded a different-look side to their usual XI, with Richard Duffy and Matt Tootle both sidelined, and a much-changed midfield including Matty Virtue, Noor Husin and the returning Liam Noble.

The Magpies fell behind after just eight minutes as a contentious free kick whipped in by Lee Holmes was met by Dean Moxey, who struck the post before the rebound was converted by Jake Taylor.

Notts mustered a couple of half-chances as a Jon Stead header from Dan Jones's delivery bounced tamely to Christy Pym and Lewis Alessandra also failing to beat the Exeter keeper with a shot from the corner of the box.

However, Pym was largely untroubled in the first half, while the visitors were more dangerous and doubled their lead on 42 minutes through Stockley.

The Grecians top scorer latched on to a long ball forward, got the better of Shaun Brisley and found the bottom corner from the edge of the area to leave the Notts contingent reeling at the break.

The second half saw Notts grow into the game, but not before several more dangerous attempts from Stockley, one denied by Elliott Hewitt's goalline clearance and the other cannoning off the woodwork.

However, the deficit was halved on 73 minutes when Troy Archibald-Henville hauled substitute Shola Ameobi down in the box, prompting the referee to point to the spot.

Jon Stead then subsequently despatched the penalty, sending Pym the wrong way, but despite a late flurry of attacks, they couldn't find an equaliser to prolong their unbeaten home record.