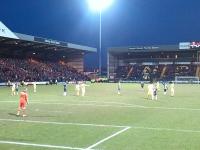 Notts County came back from a goal down to defeat Sheffield United 2-1 today in a tense game at Meadow Lane.

Blade Conor Coady's goal within the first two minutes of the match deflated the Magpies faithful, but rather than making it an afternoon to endure and suffer for all those linked with Notts, the team in black and white made a real fist of it and came back thanks to goals from Enoch Showunmi and Mark Fotheringham.

Shaun Derry went for a 4-2-3-1 formation today, Showunmi playing as the lone striker. There was good news and bad news today regarding County’s playing staff: on the plus side, Kieron Freeman and Callum Ball were both made available for the Magpies after the club arranged for both to return on loan, but on the flip side, the majestic Callum McGregor was back at Celtic after his loan expired.

If anyone has seen the Harry Enfield sketch where the Arsenal 1930s team plays the Liverpool squad of the 1990s, it has a legendary quote whereby the old-school commentator begins the game with: “And they’re off… and it’s a goal.”

That’s what it felt like for the Notts fans, as Coady played a quick one-two with frontman Chris Porter to allow him into the Notts box, and made no mistake with a composed first-touch finish past Bartosz Bialkowski. 1-0 down, less than two minutes played.

Notts were down, but not out. They picked themselves up and went for the jugular almost instantly, as Jamal Campbell-Ryce cut inside two away players at the Blades end. However, he fired over. Then, in quick response, Porter and Coady combined again to threaten the Notts defence, but this time, the effort was wide.

Things were back on level terms in the 26th minute, as Showunmi converted a JCR cross past the Blades keeper to make it 1-1. Yes, it bounced off his chest, but they all count.

United must have taken our equalising goal as an affront, since their players and fans decided to launch into a series of reducers on the pitch, and constant chants of “handball!” from the stands.

Nevertheless, the first half ended 1-1.

The second period began as a bit more sedate affair, the first meaningful chance coming in the 63rd minute, as Porter set Jose Baxter up, but the forward’s effort skidded wide of the left-hand post. Stephen McGinn was then given too much space just two minutes later, but luckily he too was wide of the mark.

Notts, however, made the wasteful United pay shortly afterwards. Alan Sheehan, marauding down the left wing, skinned Harry Maguire and delivered a pinpoint cross that fell to Fotheringham. The veteran’s header was saved, but his quick reflexes allowed him to rush forward and tap the rebound into the net. Cue wild celebrations in the Kop.

The rest of the match made for some incredibly nervy viewing, as Notts seemed to invite the Blades forward to attack on too many occasions.

Nevertheless, their efforts were all wasted, and the final whistle, blown after five whole minutes of stoppage time, lifted the roof off Meadow Lane.

Notts are still in the drop zone, but are just a point from safety, in 21st place. The vibes are becoming increasingly positive around the place. Watch this space folks!