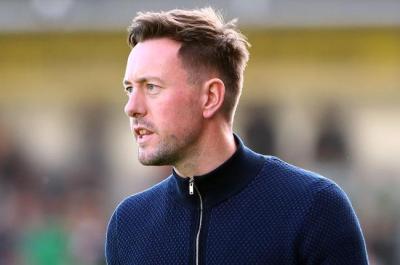 Notts County are not playing in the league this weekend because they will be taking on Tamworth when they take part in the FA Cup fourth round qualification.

The first round of the famous competition will be up for grabs when they meet on Saturday at 3pm.

Notts head coach Ian Burchnall is relishing the challenge his players will face, which he warns them about.

Speaking to the Nottingham Post, Ian Burchnall said: "It's obviously a historic competition, and it's one that everybody wants to get as far as they can in."

"I've been involved in a lot of cup competitions where we've faced lower division opposition, and it's always a challenge," Burchnall added.

"Certainly for Tamworth to get to where they are - just one step away from the first round proper - is huge for them and I know what a big game it's going to be for them.

"So it's one where all bets are off, really. When you play teams from different divisions, certainly like this when you play away, they are never, ever easy games.

"So, no doubt, it's going to be an entertaining game.

"I always remember watching FA Cup finals with my dad - Abide With Me and all that sort of stuff at the start - and it's always good memories of the FA Cup," he said.

"Growing up, I was following Leicester, and they never did so well in it - until, obviously, last season!

"I just remember a lot of different games in cup competitions where lower league opposition challenged the top leagues, and we all hope that, with us being a lower league team right now, that we can progress in the competition, and go and challenge against some of the bigger boys. That's the dream." He added.

"We had people watching when they played at home against Stourbridge. It was a very good performance,

"I think they've got good players. They are obviously very well-drilled and well-organised.

"So that provides its own problem, away on an artificial pitch, so we certainly can't underestimate the game." said Burchnall

"They are never, ever, ever easy games, of course, we're going there as big favourites but, to be honest, we're dealing with that most weeks.

"We're going in with the weight of expectancy on our shoulders.

"So, for me, I hope we can progress through and then be an underdog every now and again, against bigger opposition."