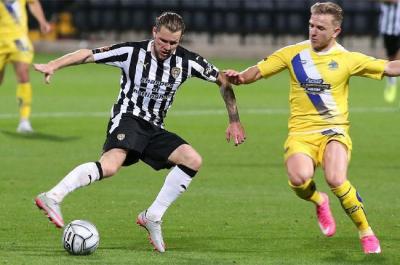 The 28-year-old midfielder, has featured heavily for Notts County in National League and has made more than 200 English Football League appearances

He made 43 appearances last season as the Magpies reached the National League play-offs, however, Reeves has activated a clause in his contract which sees him link up Alex Revell.

Jake Reeves said via the Stevenage official site: "Having just played a year in the National League, it is nice to be back in the Football League with Stevenage.

"I am looking forward to playing at The Lamex as a home player, because playing here away from home was always a tough gig. I know this ground quite well I have met with the gaffer a couple of times now, and ever since talking to him and learning how he wants to play and what he wants to achieve, it was a no-brainer for me".

This leaves Notts County requiring to further strengthen up their midfield, after Michael Doyle has taken the assistant head coach role on a permanent basis and is expected to only feature sporadically for the magpies next season.

Notts County Head coach told the Nottingham Post: "While we are of course very disappointed to be losing Jake, no one deserves this opportunity more than him.

"He had a very difficult time at Bradford after joining them when they were flying high in League One and has given his absolute all for Notts County over the course of this season. We always suspected Jake would have ambitions of returning to the EFL as soon as possible, and we have been planning for this eventuality for some time.

adding "While he will of course be difficult to replace, we have been assessing several players who we feel could step into his shoes and have identified a number of exciting prospects. These things take time, but we’re confident we’ll go into next season with a balanced and strong midfield."