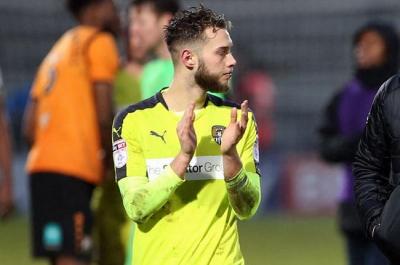 Notts County attacker Jorge Grant has hit out at the fans who have criticised his performances in recent weeks and insists that he thrives on pressure in terms of performances and scoring goals.

The 23-year-old came off the bench against Stevenage last week to net the opening goal in what ended as a 2-0 win.

The goal was his first since his all-important equaliser at Lincoln City in mid-January, a long wait for his 18th of the season, and he celebrated by putting his fingers in his ears.

“I was just blocking out the haters with the celebrations,” Grant told the Nottingham Post.

“Me and the missus were watching some Vines and there was a lad who put spoons on his eyes to show that he wasn’t paying them attention. This was my way of just saying I am just getting on with the job in hand.

“I just try to get on with it, but it’s hard when your mate says ‘have you seen this?’. Some of the comments are quite funny actually so I do laugh.

“But there are some when you think 'I’ve got to prove him wrong or him wrong'. That’s life I think. Everybody doubts you in a way, so you’ve just got to go out there and prove it.”

“I think with the start I had everybody expects me to score goals. From a winger’s perspective, it’s not often they score as many as I have already this season. In that way it’s very pleasing, but I like pressure.

“I want people to be on at me and wanting me to do things more and more. I'd rather it be that way than people say 'he’s not scored that many, so it’s okay’. When people put that pressure on you, you thrive on it.”